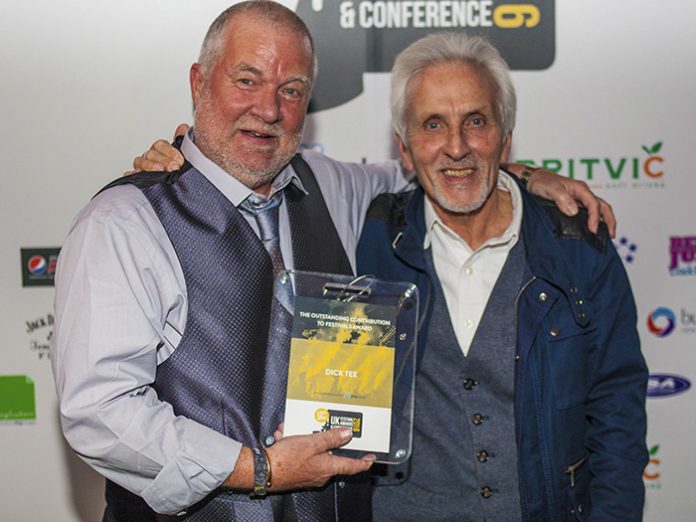 Over 600 festival professionals headed to The Roundhouse to celebrate the hard work, vision and creativity of the UK festival industry in an award ceremony hosted by DJ and music journalist, Mary Anne Hobbs. Dick Tee was honoured with The Outstanding Contribution Award which was presented to him by Greenpeace’s Bob Wilson, Dick’s first client, who said:

“This award recognises Dick’s consistent high levels of production management across a career spanning three and a half decades in the live events industry. Anyone who has worked with him will recognise he has never been one to rest on his laurels. By always striving for new and better ways to do things, Dick has been bold in introducing a variety of production innovations which have changed the industry for the better.”

In his 35-year career, Dick has worked at over 200 festivals, most notably Glastonbury Festival and Reading Festival, in receiving the award he “thanked the members of his family, staff, and numerous suppliers who had contributed to building and managing the sites, stage builds and ensuring thousands of band’s production deliver performances on the day to entertain over seven million people.”

Dick’s ever present cheeky humour was encapsulated when his jacket came off to reveal the upgrade to his trademark hi-vis: a star spangled ‘Dick Head of Production’ waistcoat!