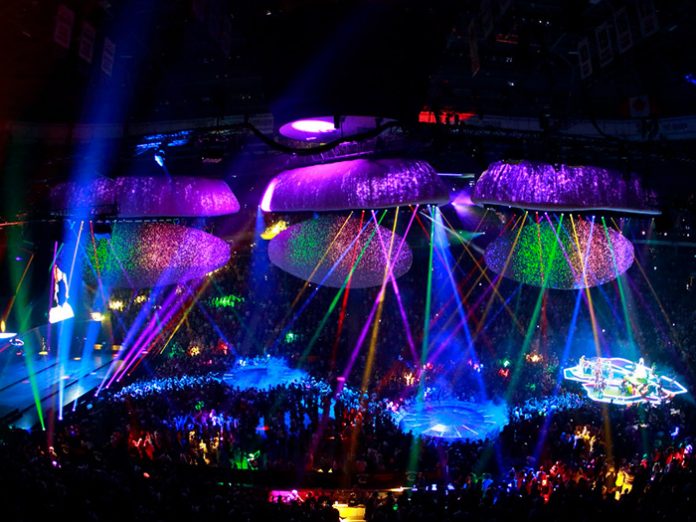 Lady Gaga opened the Joanne World Tour with a show-stopping performance of Diamond Heart on what looked like a typical TAIT stage platform until the stage went ‘Gaga’ and moved into different configurations. The jaw-dropping 85ft wide main stage is fashioned with three automated lifts used for scenic props and staging equipment, in addition to, five performer wave lifts surrounded with LED video panels. The lifts transform the stage into several intricate looks throughout the show.

The stunning aesthetics of the Joanne World Tour gave many attendees goosebumps as the set and stage, built by TAIT, took over the entire arena. The full layout consisted of a very dynamic and kinetic main stage, three flying bridge platforms which double as projection displays, two satellite stages and an LED integrated b-stage.

“At first, Gaga’s stage looked like your everyday, static platform. But then, two smaller pieces rose out of it to form two additional platforms. After that, the stage went into all sorts of crazy configurations: stairs, diagonals, and a place to land a bridge that dropped from the ceiling. Yep, there was a bridge that was busy being a video monitor and colour pod when it wasn’t being used as a walkway to get from one stage to another. Suffice it to say: The show’s staging was impressive.” commented Carly Mallenbaum, USA Today.

Considering that Gaga tours are infamous for their very intricate and experiential sets, a shape-shifting main stage was not enough for the Joanne World Tour to top the charts. As TAIT has had many audience-goers ‘experience the extraordinary’ with Lady Gaga’s past tours, the Oscar-nominated singer-songwriter once again relied on TAIT to push the boundaries of engineering virtuosity and manufacture the most complex set to date in Gaga touring history.

TAIT designed and manufactured three inflatable lighting pods which hang 60ft above the audience and house billboard-like, video projection displays. When not being used in billboard display mode, each video projection display descends 50ft below its lighting pod and converts into a 50ft long bridge platform giving Lady Gaga and her dancers a catwalk to travel on from the main stage to the satellite stages and to the multi-dimensional, LED lit b-stage at the other end of the arena.

Through her various acts and costume changes, Lady Gaga treks the entire arena via bridge platforms giving fans an up close and personal experience with the star. Fans raved about her first live performance of Dancin’ in Circles where she performed a fierce dance routine on one of the two, 25ft in diameter, satellite stages located in the centre of the arena. As the song came to an end, a hydraulic scissor lift, installed into each satellite stage, raises her 10ft. above the stage to meet its designated bridge platform.

Another praised moment of the Joanne World Tour is during the pop star’s performance of Come to Mama on her LED integrated b-stage where she created stunning visuals with her completely custom laser piano. TAIT custom-designed the jagged, heart-shaped, laser piano to match the b-stage’s neon aesthetics by furnishing it with 44 lasers that shoot beams of vibrant colours through the arena with every single keystroke she played. The shell of the piano is built out of a 1.25-inch acrylic, in addition to, a mixture of mirror and dichroic filmed polycarbonate fascia which amplified her flashy laser show.

A production of this capacity requires a team full of experts and cutting-edge technology. Lady Gaga brought on Production Manager, Robert ‘Hydro’ Mullin, and Creative Designer, LeRoy Bennett, who teamed up with TAIT to bring her awe-inspiring vision for the Joanne World Tour to life. TAIT Navigator, a proprietary automation software, is responsible for cueing and operating all of the staging and flying elements that TAIT provided.

With a sold out arena and over 150k Periscope viewers, opening night of the Joanne World Tour gave fans a ‘Million Reasons’ why Lady Gaga kept this epic production a secret and by the likes of USA Today, The Globe and Mail Inc., Entertainment Weekly and many other major publications, it was well worth the wait.