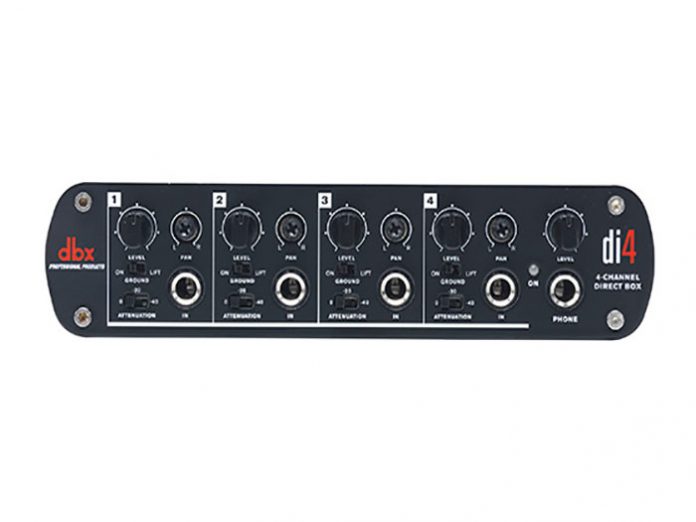 The problem of converting unbalanced signals into a balanced output has now been solved with the new 4-channel Di4 from dbx by Harman. The Di4 is suitable for mixers, PAs and recording consoles while also functioning as a multi channel stereo line mixer.

This feature permits full connectivity of keyboards, samplers and modules into one unit on stage. Independent XLR balance outputs are supplied to the stage box for a FOH engineer allowing independent mixing for stage monitoring.

To use the dbx Di4 as a DI Box

Connect the unbalanced signal to the Di4 via a 1/4-inch unbalanced jack to one of the channel inputs on the front panel of the unit. Then connect an XLR balanced cable to the corresponding channel output on the rear of the Di4 and connect to your chosen destination. If the input signal strength is too high you can depress the 20dB pad. If there is a ground (earth) loop hum you can remove it by depressing the earth lift switch.

To use the dbx Di4 as a Line Mixer

You can mix volume and pan of all input signals to a single stereo pair of RCA connections on the rear of the Di4. This transforms the unit as a fully functional line mixer. Connect the RCA stereo master outputs on the rear to your chosen destination and adjust the individual volume and pan controls for each individual channel on the front of the Di4 for personalisation.