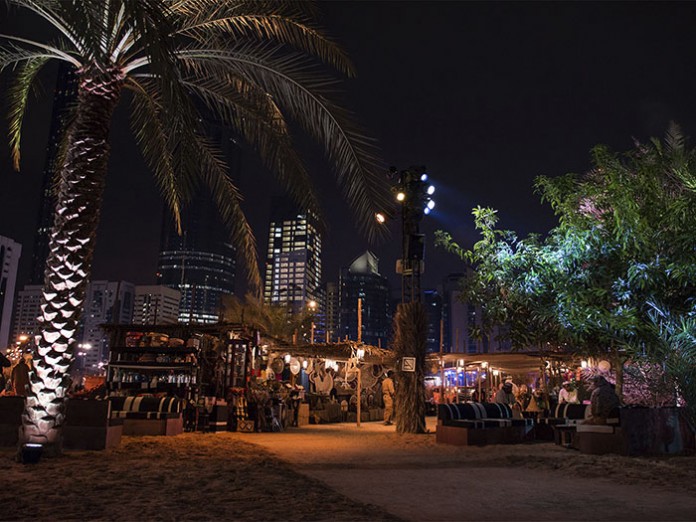 The festival narrates the ongoing conservation of Abu Dhabi’s most historic Fort, and through a series of highly interactive elements, hosted a celebratory programme to reinstate the Qasr Al Hosn site as the cultural heart of Abu Dhabi.

Qasr Al Hosn, which has stood as the symbolic birthplace of the Emirate and home to Abu Dhabi’s ruling Al Nahyan family, is undergoing a comprehensive process of preservation, restoration and rehabilitation.

Based around the historic Qasr Al Hosn Fort, the Qasr Al Hosn Festival 2016 welcomed over 130,000 visitors who were able to immerse themselves in an interactive setting exploring and celebrating the culture, art and history of Emirati heritage that has formed the basis for the gleaming modernity and success of the region today.

Lead Lighting Designer, Stephen Page and a team of seven designers and on-site LDs from dbn worked closely with Tom Ralston and Jonathan Godsmark from Eclipse Staging Services Dubai who provided all the lighting, AV, power and rigging equipment for the huge open air interactive experience. dbn’s ambitious task was to design an overall scheme to light all the different areas of the site.

Preparations for the 11 day event started the previous year, just a few months after the hugely successful 2015 festival. The final designs required an astonishing 3,900 separate lighting fixtures, together with around 45km of cabling and 1,200 plus metres of trussing. There were a total of 22 Dimmer Cities across the site involving 28 lighting dimmer racks and 52 lighting power distros.

Control for the 24 DMX universes of lighting required for the main site was from Eclipse’s Jands Vista  T2 Console, supported by one of dbn’s Jands D1 processors and additional PC based Vista consoles and wings, all acting as part of a single Vista network. This allowed operating in a tracking backup configuration, and enabled network based programming and processing, coupled with fail-safe show operation.

Page directed the programming and focus for the whole festival, supported by Nick Buckley and Pete Isherwood, with further assistance from Phil Woodbridge, Paul Crompton and Paul Moloney, all working with an extensive crew of lighting and electrical technicians and riggers from Eclipse.

The festival is the largest of its type in the region and includes areas representing the main settings for historic life in Abu Dhabi: Oasis, Desert, Marine, Island life and a zone dedicated to the Qasr Al Hosn Fort itself; and showcased the historic crafts and skills that Abu Dhabi culture has been built on. The event featured a Festival Stage Arena, and numerous exhibitions, installations and performances in buildings and temporary structures across the site.

Each element required specific treatment to add atmosphere and dramatic context to the vast range of activities taking place – anything from music, dance, story-telling and poetry – to cookery, agriculture, weaving and sailing – and included a petting zoo and an artificial sea complete with waves!

“The design had to be multi-faceted,”Page explained. “The job of the production is to take visitors on a journey away from the urban bustle of the city around it, through the nation’s rich history and heritage to understand how they act as the background for the success and growth of the nation today.”

Each themed area required a discreet approach to enhance the visitor experience whilst incorporating the requirements of multiple live performances, along with practical lighting to support demonstrations and workshops showcasing extremely detailed craft work.

Page added that major challenges were the scale of the project (the site covers a whole block of downtown Abu Dhabi) coupled with the diverse range of activity taking place over a protracted period each day, all in the centre of a busy well-lit urban area.

The design had to reconcile the diverse, and sometimes competing, elements of the event into one coherent integrated overall aesthetic, whilst also allowing thousands of visitors to navigate their way around the Festival and enjoy a unique experience in each setting.

With lengthy opening hours, the lighting design had to work in tandem with changes in natural lighting conditions from bright midday sunlight right through to darkness, as well as the physical movement of people from interior to exterior locations across site.

A wide range of fixtures were selected from Eclipse’s stock – from a birdie to a Clay Paky Alpha Spot 1500 HPE and everything in between.

All were rigged discreetly and concealed in surrounding scenic elements where possible, as well as from the roofs of buildings and a series of over 100 vertical truss masts across the site.

Background colour washes for each area were achieved with 120 of SGM’s P5 LED floods, with further layers of texture and colour added from a range of moving lights including Clay Paky Alpha, Sharpy and A.Leda range units; and Mac Viper, Aura, 2K and 700 series fixtures.

Finally a full range of generic fixtures was used to highlight specific areas and activities within the overall scheme.

For the Oasis area, for example, the design sought to emphasise the vegetation and sensation of growth and life in the lush environment, along with the feeling of being lit by moonlight through the tree canopy after dark, so each of the 100 plus palm tree trunks was subtly up-lit with an LED PAR, while the leaves were skimmed and textured with a mix of Chauvet LED PARs and ETC Source Four profiles fitted with gobos firing through the leaf canopy to add richness and depth.

Colour and texture was also provided by moving lights programmed to alter focus on cue, creating and defining areas for larger performances of traditional dance within the space. Further fixtures were rigged in the canopy of the trees themselves as ‘specials’ to gently delineate storytelling and demonstration areas.

Qasr Al Hosn has served as a centre for protection and government within the Emirate since Abu Dhabi Island was first settled in the 18th Century and the fort is at the heart of the festival site both literally and metaphorically. With huge historical significance, the fort is the oldest building in Abu Dhabi and currently undergoing extensive restoration works.

The exterior of the fort was floodlit to highlight the sparkle and colour of the traditional coral stone construction, with Sharpy, Sharpy Wash and Super Sharpy fixtures being used to define the towers and outline the architecture of the buildings and walls, as well as to project the outline up into the sky above the site.

The Festival Arena, where Clay Paky 1500 Wash and HPE fixtures were used as the basis of a versatile house system, played host to a number of shows produced by People, including a special version of the popular Al Ain Bird Show, and the night time Desert Safari exploring the native animal species of the vast Abu Dhabi desert.

dbn also developed and installed the lighting design for a new permanent exhibition housed in the Qasr Al Hosn Visitor Centre located close by the Fort. People designed and produced an installation telling the story of Abu Dhabi and its people through the city’s oldest building (Qasr Al Hosn) featuring displays of historic artefacts, fascinating oral testimonies and historic photographs that bring this important monument to life.

Nigel Walker, dbn’s Special Projects designer, acted as lead designer for the exhibition area and used a range of ETC and Prolights StudioCOB fixtures to complement Lumenpulse track fittings and bespoke installations of various discreet LED sources built into the structure of the exhibits.

Page stated: “It was brilliant to work on the Qasr Al Hosn Festival again this year, I was very proud of the whole team from dbn and the part we played in helping to make the festival such a huge success, and look so beautiful.

“Working with People was great! They are a relatively young agency made up from a hugely experienced and talented group of people, and are already establishing themselves as one of the leading agencies in the region. I’ve designed a number of jobs for them already and have really enjoyed the ingenuity and creativity of their approach, which is a refreshing working environment. As usual, Eclipse were extremely good – technically strong, hard-working and supportive.