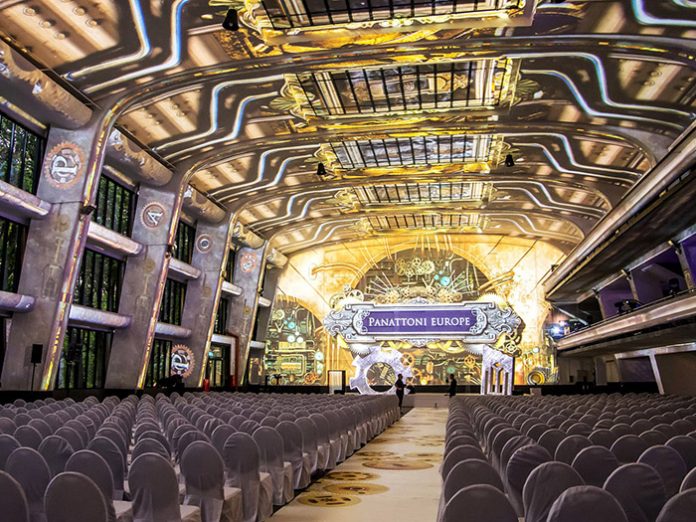 Poland-based industrial space developer Panattoni Europe celebrated the end of its business year with a gala at the Tor Sluzewiec racetrack, which featured innovative 3D video mapping by VES. A d3 rental partner, VES used d3 media servers to transform the interior of the Warsaw racetrack into an immersive steampunk environment.

“In our productions we always focus on customised, unusual solutions in terms of the venue and technology used,” said Michal Pieprzowski, Creative Show Director of Anix Event, the gala’s organiser.  “This time we wanted to replace classic scenography with new technology and convert the building into one big, multimedia screen.  The concept was possible thanks to client trust and openness.”

Panattoni Europe has developed 4 million sqm of warehouse or production facility space since 2005.  That number includes as much as 3 million sqm in Poland – more than any other developer in the domestic market.  So it was time to celebrate the conclusion of another successful business year with hundreds of invited guests.

VES was tasked with turning the historic, 1939-era Tor Sluzewiec interior into a warehouse full of moving, steampunk-style cogwheels.  Invitees were surrounded by projections on the ceiling and every wall of the building; the dynamic visuals were integrated with a surround sound audio track.

VES used d3 media servers to previsualise the complex projections without making frequent visits to the racetrack and capturing masks for every projector, which shortened time and costs on-site.  Five operators were involved in the two-day set up at Tor Sluzewiec.  They installed two 4x4pro and one 4x2pro media servers, which allowed several high-resolution files to be played simultaneously creating unique visual effects.

The multimedia scenography covered 4,200 sqm of interior surfaces.  It was produced by 31 Barco and Christie projectors, which required nearly 67 million pixels to be pushed out of each media server.  In addition provided 270 lighting fixtures, including LED moving heads from Prolights.

“We had 18 technicians and five d3 programmers working on site plus people coordinating event logistics,” said Iwona Czarnata, Managing Director of VES. “Events like the Panattoni Europe gala prove that productions with international-level concepts and projections can happen in Poland.” Lukasz “Bandzi” Blazewicz was the head of the VES technical team responsible for production.