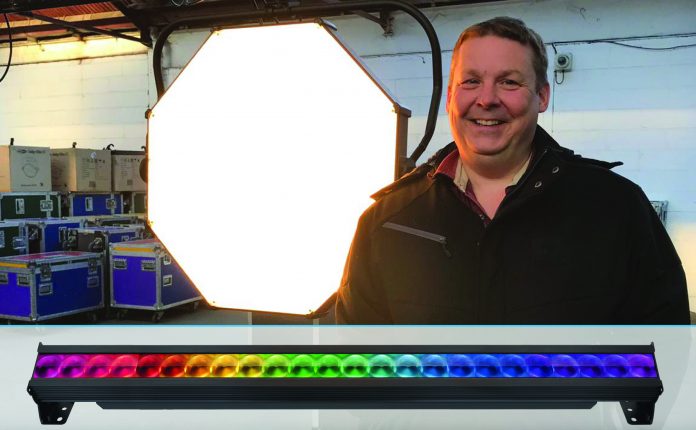 Purchased primarily for its film/broadcast, photography and corporate clients, the Chroma Q Space Force LED soft light has also proven itself on some of Colour Sound’s entertainment projects due to its extremely high quality, variable white light.

Colour Sound Managing Director, Haydn Cruickshank commented: “Recently we’ve had more and more requests for a versatile white space light, and the Space Force has really helped us to fill that gap. As an LED fixture, its cool running and no fans means no noise, which makes it perfect for the demands of Film and Production work. Also, its range of colour tones is a real strength for any lighting application.”

The Space Force fixtures were recently utilised on prestigious Esports competitive gaming tournament, FACEIT Major London 2018. Designed by LD and Production Manager, Simon Barrington, the competition culminated in a live final at the SSE Arena, Wembley in front of 10,000 fans and a global TV audience of millions.

Cruickshank has also been impressed with the Chroma-Q Color Force II 72 LED batten, cyc and wash light, which Colour Sound invested in last year to bolster its stock of the original Color Force 72 fixture.

He commented: “Although our Color Force battens have been a fantastic product and are still for hire after many years of regular use, with the technology moving on we decided it was time to upgrade to the Color Force II.”

“Like its predecessor, it has, in my opinion, significantly raised the performance bar again for an LED alternative to traditional cyc, wash and effects lighting sources.”

Summarising the relationship with Chroma-Q, Cruickshank commented: “Colour Sound has been using Chroma-Q LED fixtures for more than a decade. With innovative products such as theirs, we’ve built up an extremely strong offering for entertainment lighting over the years, and we have now expanded into our fourth warehouse this year.”

All of Colour Sound’s Chroma-Q fixtures have been supplied by UK distributor, A.C. Entertainment Technologies Ltd.

Cruickshank commented: “A.C.’s people are an absolute pleasure to work with. Their customer service is second to none. It’s not just that they’re friendly. The company invests in its people so that they’re knowledgeable too, and that’s a real benefit when needing a quick answer in this pressured industry.”