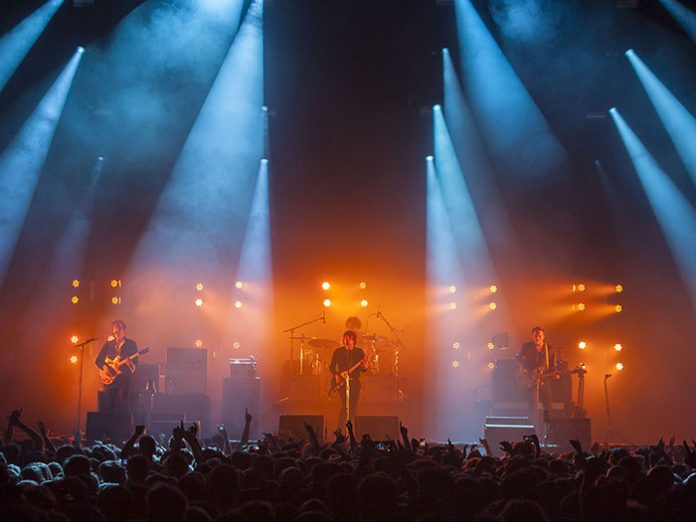 Colour Sound Experiment supplied a bespoke built touring lighting ‘specials’ package to alt rockers The Kooks for their recent The Best of … so Far tour.

This UK leg of the tour closed with a high profile gig at London’s Alexandra Palace for which additional lighting production was added, together with IMAG video.

The band has been a Colour Sound client for some time and this tour was projected managed by Alex Ryan, who worked closely with Kooks Production Manager Dave Skelton, who is also their monitor engineer.

The need was for a tourable, quick-rig solution to get their own lights in and up-and-running every day, which could then be used in conjunction with the venue’s overhead house rigs.

Ryan and the Colour Sound team designed and fabricated the five custom dollies which were on wheels and made from modified pre-rigged truss sections in which the lights also travel. They were simply wheeled into the gig each day, tipped vertically and secured on special floor bases.

The dollies are also designed specifically to fit three-wide-two-deep in the truck for fast and expedient loading. Rigged to each dolly truss section were 10 ProLights 7 LED wash moving lights, two Martin 3000 strobes, two PixelLine 1044 LED battens and a 4-lite Mole. So the swift and straightforward exercise of rolling them off the truck and onto the stage immediately put over 100 lighting fixtures right there and ready-to-go within half an hour of tipping the truck.

Colour Sound supplied an electric kabuki drop which was attached – where possible – to the house front truss for the start of the show whereby the band were dramatically silhouetted by the BMFLs blasting through from the back. The Diamond 7s were the main effects lights of the show, and with a striking array of 60 units, it was possible to create numerous moods and looks to augment the dynamics and style of the music.

Lighting for the tour was designed by Jvan Morandi from Placing Shadows and coordinated on the road by Lighting Director Jordan Babev. Colour Sound supplied two ChamSys MQ80 consoles for control – live and backup – and dimmer tech was Jonathan Curtis

IMAG video for the show comprised two 6 metre wide by 4 metre side screens made up from Colour Sound’s proprietary BT7 product, plus operated cameras – one at FOH and one handheld on stage – and four robocam system positioned around the stage. These were mixed by Tom Bassford.

Ryan commented: “It was great to work with Dave again on this one, and to be challenged to come up with a neat solution for the touring lighting package. It’s an area where Colour Sound excels due to its vast experience of designing bespoke elements with the two main goals of keeping the LD happy, and making it as smooth, quick and slick as possible for the crew”.