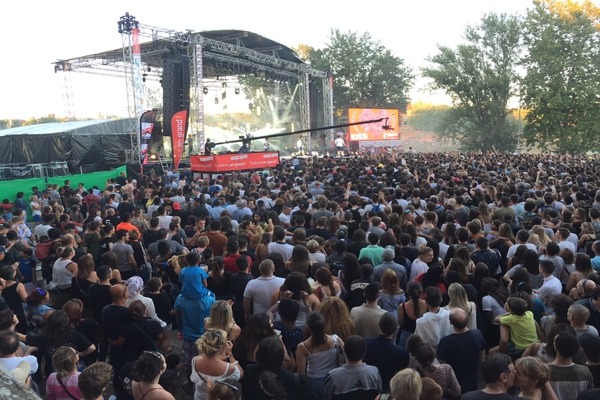 As France’s most listened-to Radio station with an average audience in the region of 6 million, the NRJ Tour presents live music events around France, featuring bands and DJs both local and global. For a number of years, NRJ has staged a large free gig in Toulouse and this year’s renewal, the largest yet, attracted around 300,000 people to see sets by international stars like David Guetta and home-grown talent such as Maitre Gims and Black M.

Coda Audio and Concept Group rented a large proportion of the gear for the show from Studio Haifax in Belgium. Yves Van Moerbeke programmed all the amplification, while time-alignment involved further collaboration that included Coda Audio’s Eddi Krueger.

The main system comprised 32 AiRAY, 20 SCV-F 18″ sensor controlled subwoofer, 12 SCP dual 18″ sensor controlled subwoofer and 2 APS. The main delay system consisted of 48 ViRAY and 12 SCP. Given the extensive area of the site, there were further delay systems for the river and bridge locations, employing various combinations of AiRAY, ViRAY, SCP, G715, G308 and HOPS8. The backstage area was served by 10 G715, 10 TiRAY and 4 TiLOW subwoofers. In total, more than 250 Coda Audio speakers ensured that every member of the vast audience experienced the full impact of every set regardless of their position in, or in some cases, outside the large riverside park.

“When someone asks me what I ‘think’ of AiRAY, I always say it’s more what I ‘feel’ about it – a freshly-rigged, full range driven AiRAY system always gives me goosebumps and chills! The fullness and accurate frequency response is just astonishing and rigging any Coda Audio array is a breeze because of the fully integrated rigging system. The sensor controlled subwoofers define a whole new approach towards gaining headroom and punch. The show was a great success and working with Baptiste, Thibault and Eddi was a pleasure. NRJ Toulouse was a demonstration of just how effectively Coda Audio’s excellent range of systems can be deployed,” explained Van Moerbeke.

18 months since the establishment of the company’s French subsidiary, Coda Audio France has supplied Festival Arte Flamenco in Mont Marsan, one of Europe’s largest of its kind, and 5 additional venues of assorted sizes, which were equipped with ViRAY, TiRAY and HOPS systems.

Concept Group have been responsible for the festivals audio for the last 4 years. Both Co-Manager Johann Dubuc and Sound Engineer Baptiste Hazera, utilised Coda Audio for the first time this year, praising both its sound quality and ergonomics. CODA AiRAY was also installed to meet the needs of the main stage of a huge free concert on July 14 2017, at la Prairie des Filtres, in Toulouse. In-which, a wider range of CODA speakers supplemented the main system for delays and backstage.