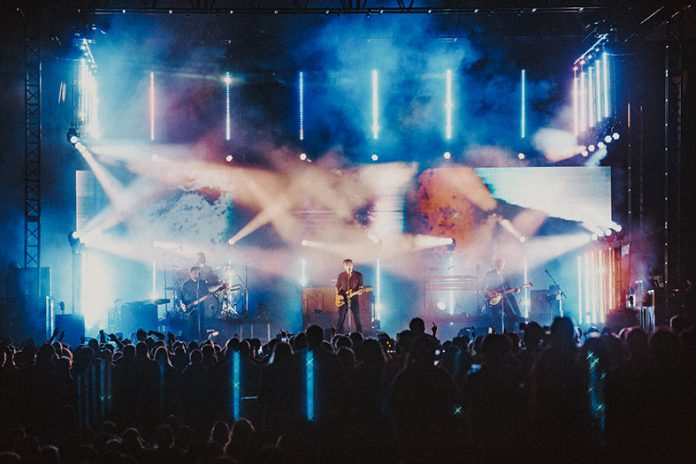 Indy rock band Death Cab for Cutie are spending this summer touring North America in support of their latest album, “Thank You For Today.”

Death Cab for Cutie launched their spring/summer tour in Las Vegas, played stops at Forest Hills stadium in Queens, New York and the famed Red Rocks amphitheatre in Colorado and will wrap up with dates at the Hollywood Bowl and in Portland, Oregon and Redmond, Washington in September.  The North American leg follows tours through Europe, Australia and New Zealand earlier this year and continues the band’s 2018 presence on the road.

The use of grandMA3 light marks the first multi-week tour for the new consoles since Clearwing Productions invested in grandMA3 lights for its inventory.  “As lighting fixtures advance, consoles need to advance with them.  We’re always trying to get ahead of the technology and the competition, and investing in the grandMA 3 release is the best option,” says Key Accounts Executive at Clearwing Stephen Harvey.

Harvey, who supported the band’s tour last year, told Greer that grandMA3 light would be available for the new North American dates.  “I was all for it,” said Greer who programmed the initial show design.  “I’ve been using grandMA2 since it came out and was excited to get my hands on the newest thing.”

Lighting Designer and video content provider Michael Brown designed Death Cab for Cutie’s 2018 show whose design has been adapted for this year’s tour and modified in scale depending on the venue.  The stage features 18 lighting towers in a U shape, which envelop the band; the fixtures are pixel mapped to run low-res video.  Between the towers upstage is a rectangular, high-resolution LED video screen approximately 40 by 8ft in size. A Catalyst media server is integrated in cueing.

“I’m pretty excited to be one of the first in the field using grandMA3,” Greer reports.  “I got a lot of compliments on it at the Firefly Music Festival; a lot of people hadn’t seen grandMA3 in person yet.  I feel confident that I can run our same show on it and have peace of mind that grandMA3 will be solid.”

Greer is impressed with grandMA3’s new features and functionality.  “I really enjoy the new dual encoder wheels, which help to speed and customize control of the parameters of the lights all within the same wheel.  And with the new command layout, I’m able to integrate the new encoder knobs to control things like speed, rate and executor timing.”

Greer notes that grandMA has “always had one of the strongest effects engines, and I understand that Mode 3 offers more customization, even more ability to create unique effects using phasers while maintaining control over individual attributes. It’s more ergonomic for the operator now. The touchscreen is also more sensitive in this release and way more accurate and comfortable.”

Clearwing’s grandMA3 lights have also been used for a multi-artist weekend festival series in Minneapolis as well as multiple one-off concerts and events.