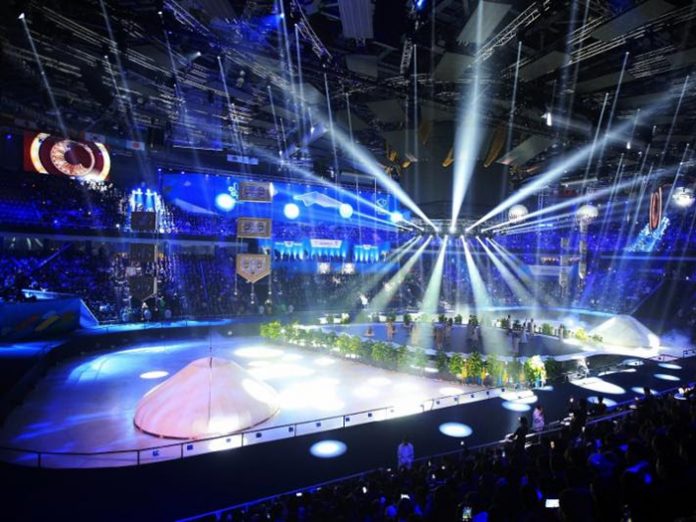 More than 400 Claypaky fixtures were selected to play a key role in the large scale lighting designs for the opening and closing ceremonies of the Winter Universiade 2017 at the Palace of the Republic in Almaty, Kazakhstan. The ceremonies were attended by 12,000 visitors and broadcast live across 100 television channels worldwide.

The ceremonies’ lighting was designed by Oleksandr Manzenko of Kazakhstan based production design, solutions and rental company, Samat Show Technics, who were responsible for the games’ overall production.

For both the opening and closing ceremonies Manzenko required lighting fixtures with clear, sharp optics, capable of producing bright enough outputs to stand out against the multiple video screens that were situated around and above the arena’s central raised platform.

Manzenko stated:”We used Claypaky because of the excellent quality of light and the unconditional reliability of the equipment.”

Employing the award-winning Scenius Profiles and Scenius Spots, Manzenko utilised the fixtures’ gobo and animation wheels to create a myriad of effects that moved across the surface of the ice surrounding the central stage.

“For us it was very important to use the Claypaky Scenius range. The brightness of the fixtures is unmatched, and they come with a great set of gobos,” said Manzenko. “There was no floor video so I used the gobos with the animation effects to extend the atmosphere of the central stage across the arena.”

The Scenius Profile is equipped with 14 gobos (6 rotating + 8 fixed), while the Scenius Spot has 2 wheels with 6+6 rotating gobos. The Scenius’ incredible output of 30,000 lm at 1400W mode ensured that any animation stood out perfectly against the video screens.

The Scenius’ advanced colour mixing systems, including a CMY colour system and linear CTO, also ensured that the colour of the lights was translated with greater integrity to the production’s video cameras.

Manzenko also used a large selection of the award-winning Mythos to light performances around the edge of the arena, utilising the fixture’s adjustable electronic zoom to achieve cross arena looks that varied in depth and scope.

“The Mythos was located around the arena because of the fixture’s versatility,” explained Manzenko. “I wanted to use its wide beam for a wash at 50 degrees with a gobo in the Mythos’ Wash mode, but used the fixture in Beam mode to highlight performers on the stage and various pieces of flying set.”

The Sharpy and A.leda B-EYE K20s were also used as effects lights for the opening ceremony of the games.

“The speed of the positioning and switching of the Sharpy parameters is indispensable. It allowed us to make beautiful colour changing effects to the beat of the music,” continued Manzenko. The Sharpy’s 540-degree pan movement is measured at a maximum speed of 2.45 seconds, while the 250-degree tilt takes a maximum of 1.30 seconds.

“The B-EYE K20 fixtures offered us incredible shape effects, as well as allowing us to adjust the colour temperature of the stage in wash mode,” explained Manzenko. “Using the built-in macro effects, I could easily create a different atmosphere for each piece of music.”

Speaking of Claypaky, he said: “Claypaky products are always perfectly compatible with every element of the different shows that we produce, including their video elements. The integrity of the colours and strength of output from the fixtures ensures everything looks good, as well as the unwavering reliability of the fixtures. They never let us down.”

The Winter Universiade event is a biennial multi-sport and multicultural winter event, held for student athletes around the globe between the ages of 17 and 28. The event was held this year between 28th January and 8th February and is one of the world’s largest sports events. This year, 25 countries competed in the games, with Russia topping the leader board with 29 gold medals.