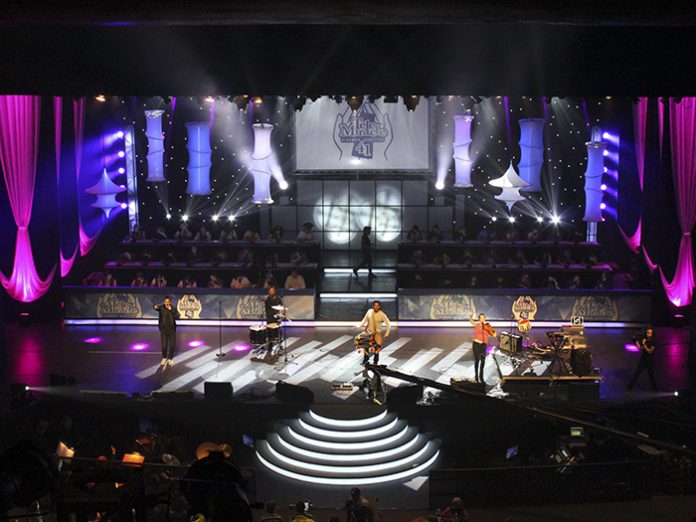 The Kinsmen foundation is a Canadian non-profit organisation that assists Saskatchewan people to acquire special needs equipment and access to medical treatment. Telemiracle alternates between Regina and Saskatoon annually and air on the province’s CTV affiliates.

This year Slobodan Marin, who has served as Lighting Director for the past four telethons, stepped up to the role of Lighting Designer.

“Last year Scenius made its debut on Telemiracle, and we wanted to see what else it could do to give the show a nice kick,” said Marin. He mounted six Scenius fixtures on staging pipe to back light a 60 30-foot see-through screen downstage.

“Scenius gave us a totally new look with the screen,” he continued. “We’d bring the screen down in front of Scenius to block the set then zoom in and out with certain gobos so the Scenius beam went from 5 to 55 degrees. You’d see the gobos shrink and open up – it looked fantastic. And six fixtures were enough to provide nice coverage from about 30 feet away.”

Marin used the gobo effects with a country band playing in front of the screen and with a child pianist accompanied by a ballet dancer. “We got mountain style effects for the pianist and dancer with the gobo rotation,” he said. “I really like Scenius – they offer such variety in what you can do, especially when combined with a screen and gobos.”

Deep in the set upstage was a rear projection screen suspended from pipe. Marin put two B-EYE K10s on each bottom corner facing the cameras. “They’re pretty powerful lights and give a great star filter effect,” he noted. “Sometimes I’d do a lens rotation to give a nice chase off the star filter effects around the light – it looked fantastic, especially for a performance of Leonard Cohen’s Hallelujah song. We had a nice amber colour on them, too.”

Marin said he was “always happy with Claypaky products. I’m always looking for something new to test, and Claypaky fixtures give me so many opportunities to show what I can do as a Lighting Designer.”

Robert Juliat’s innovative front-edge stage light, the Dalis 862 Footlight, made its first appearance at Telemiracle this year. The fixture features 48 patented asymmetric reflectors in a double row. Marin deployed two Dalis 862s as “bottom kickers,” which were particularly effective in “covering areas where the hats of country singers made shadows on their faces,” he explained. Marin also used them in a strobing mode with the K10s to create effects across the stage when telethon totals were announced.

A grandMA2 on PC command wing was selected for lighting control.
A pair of MDG TheONE hazers provided light haze throughout the show. “They ran for 20 hours – almost the whole show – and were awesome. I think we refilled them just once,” said Marin.