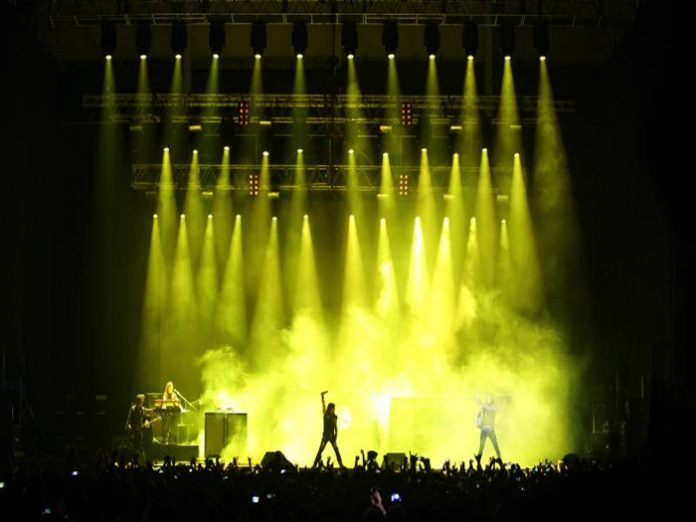 The Claypaky Scenius Unico made its official debut in Argentina at the Monsters of Rock (MOR) Argentina festival at Tecnópolis, Buenos Aires.

The high-impact light show for the outdoor festival, part of the global MOR movement, was designed by lighting designer Bryan Hartley and featured the Scenuis Unico as the show’s workhorse fixture.

Hartley was tasked with designing a versatile rig that could produce a wide range of looks for the visiting bands. He selected the Scenius Unico for its ability to perform in 3 powerful modes – Spot, Beam and Wash – allowing him to craft a range of lighting looks for each band in the festival’s line-up.

“The Unico has a very powerful selection of modes and a great CTO,” he continued. “The colours it produces are strong and varied. I can say that I have not seen such a strong combination of features in any other fixture in its class on the market.”

Gonzalo Diaz Blasco, owner of Macaio, Claypaky’s Argentinian distributor who supplied the Scenius Unico units to BALS, agreed. “The Scenius Unico was perfect for this show as it is a highly versatile and powerful fixture,” he said. “Its features allowed Bryan the creative freedom to design in Spot, Beam and Wash modes and the possibility of making precise, framed movements thanks to its framing system. The 2 rotating gobo wheels each include 6 interchangeable gobos, which with the rotating prism and interchangeable effects wheel, meant Bryan had endless possibilities for his design.”

“We believe that the Scenius Unico will become the standard fixture for entertainment lighting in the world market,” Mossi added. “Riders for Phil Collins, Katy Perry and Ed Sheeran have all come through with Unicos specified, so they were a fantastic addition to this show.”

Blasco concluded: “The Scenius Unicos were the stars of Monsters of Rock. They were up to the challenge of lighting this renowned festival.”