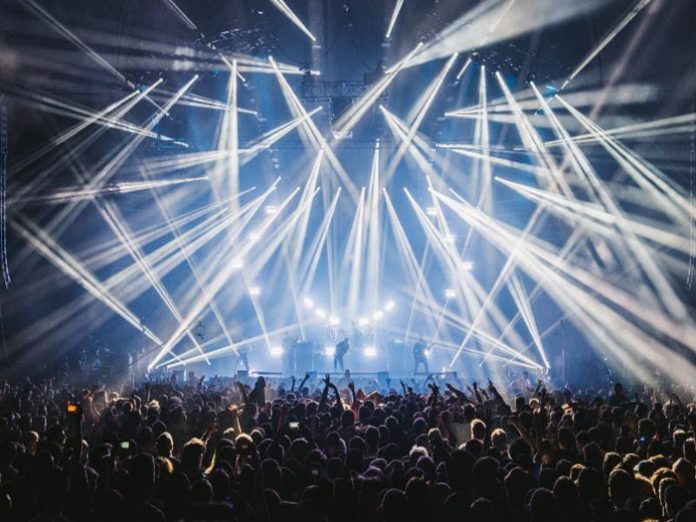 McAdams has worked alongside the band for 4 years and for the current tour design drew inspiration from the band’s latest album. All Our Gods Have Abandoned Us is the 7th studio album from Architects and features ethereal, burnt-out lunar imagery that McAdams brought to the stage through a series of clever light landscapes.

“The band are really involved in the show design and we have a great relationship where we’re able to discuss ideas openly,” said McAdams. “For this tour the initial design concept all came from the band’s latest album artwork. As a live show, it’s quite aggressive, and the lighting matches that. It’s very ‘in your face’, quite rhythmical and full of staccato.”

McAdams’ production design expands around a central circular screen onto which video content of a lunar eclipse is projected throughout the show. Six ‘finger trusses’, each holding four Mythos, draw the audience’s eyes toward the central screen, whilst a number of Mythos on an angled front truss provide key light and audience beam effects.

“On this tour, lunar and space imagery led the way in realising the looks and colour palettes,” explained McAdams. “There are a lot of cold blues and greens to create the spacey looks. The Mythos fixtures delivered these perfectly; the accurate colour system of the fixture meant we could colour match to each video palette quite easily. I needed a strong, reliable hybrid fixture to carry the lighting show, and having used the Mythos on previous designs, I knew it would deliver.”

“There is a great range of gobo and prism effects available with the Mythos and these perfectly complement the textured looks of the show’s video content,” added McAdams. “The fixture’s linear prism effect is a personal favourite. I’m a big fan of these fixtures that do more than one job on stage.”

McAdams also selected the Claypaky B-EYE K10 to provide further complexity to the lighting design, “The B-EYE has a great colour engine and I could use the fixture to provide my key light and wash light whilst also adding extra textures.”

“David March and his team at VER offered an incredible service in terms of support for the equipment they supplied,” continued McAdams. “The guys at Ambersphere also really helped get the show off the ground in pre-production. Chris Mantel, who was my main tech in Europe and lighting crew chief for Alexandra Palace show, continually went above and beyond on what was quite a challenging design to execute.”

The Alexandra Palace gig on 3 February 2018 was the band’s only UK show and followed an 8-date European tour.