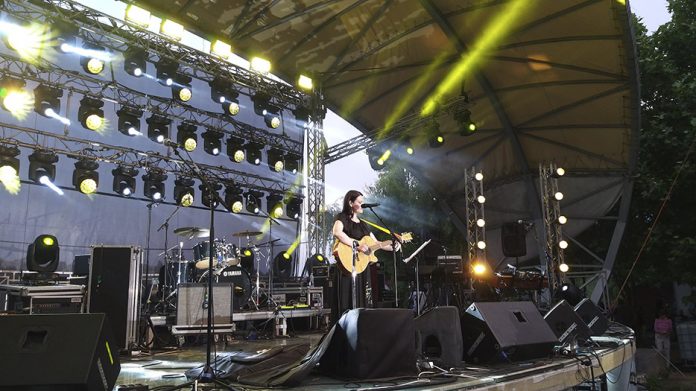 For the seventh consecutive year Flowers for the Soul: Remember Florian Pittiş an
an event honouring the Romanian actor, folk singer and radio producer who died in 2007, was held Titan Park in Bucharest.

Marbo Trade staged the free show, during which an array of Claypaky fixtures illuminated a different roster of performers each night. Marbo Trade is the distributor of Claypaky lighting fixtures in Romania.

Conceived as a “celebration of the spirit,” the event was organized by the City Hall of the third district of Bucharest in homage to the man regarded as a unique cultural symbol in Romania. The two-day show united artists and the public in a free-spirited commemoration of Pittiş, a visionary whose legacy continues to inspire Romanians. An audience spanning all age groups was treated to a blend of music, poetry, theatre and video projections in the outdoor stage.

“We used 18 B-EYE K10s in the background to create a wash wall with eight Stormy CCs and give a kaleidoscopic effect with the B-EYE rotation lens,” Gradisteanu explains. “Alongside them, we used 24 Sharpys for their beam output, which gave a dynamic look to the show. Sixteen Mythos2 fixtures lit up the sky in beam mode and delivered various effects.“Since the stage was curved we used four Scenius Profiles to colour the ceiling and create different gobo effects,” he adds. Sica Gradisteanu acted as Event Coordinator for the show.