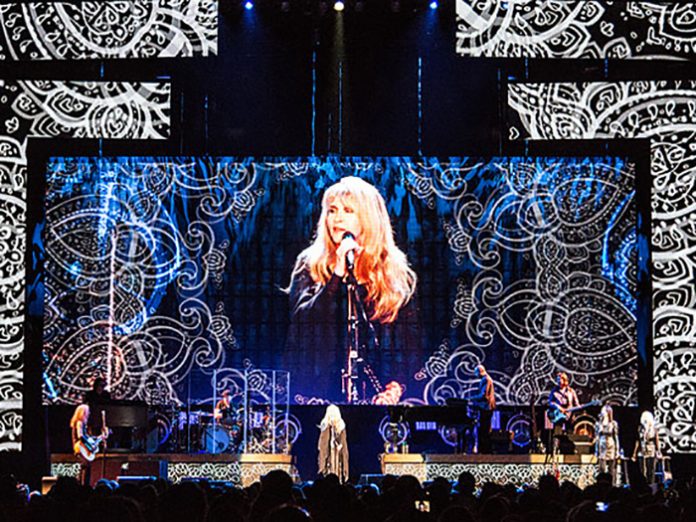 Stevie Nicks has gone solo for the 24 Karat Gold Tour playing more than two dozen arena dates in North America before the end of the year. Production Designer Paul Guthrie of Toss Film & Design in Minneapolis chose 88 Clay Paky Mythos fixtures for the lighting rig and a grandMA2 console for show control.  He previously deployed Mythos on tours for Miranda Lambert and Macklemore.

A veteran of Nicks’s tours, Guthrie endeavoured to “create something new and a bit more modern” for her new show.  “Stevie enjoys using video content so the tour features a lot of video on an LED video-wall backdrop and L-shaped scenic pieces,” he explained  “Our overwhelming lighting edict is always no smoke.  So we defer to lighting the band and adding in layers of light to create new looks.”

The versatility of Mythos offers myriad options to Guthrie.  “It’s fun to have one light that can produce a multitude of different effects in the same head,” he said.  “Mythos is basically the workhorse light in the rig.”  He notes that the tour’s complement of 100 – 120 moving lights “is now considered a medium-size rig for an arena tour. It used to be that 16 were considered to be a lot! We’ve come a long way.”  PRG’s Las Vegas office supplied the fixtures.

80 Mythos are mounted in the overhead lighting trusses where they form “solid lines of Mythos,” Guthrie reported. “On the downstage and mid-stage trusses they provide stage wash and beam effects.  Those on the most upstage of the trusses, upstage of the video-wall, create layers to add depth.” Eight more Mythos are positioned on the floor upstage of the band “to set fire” to their dynamic performance.

Tom Wagstaff, the Lighting Director for The Pretenders deploys about 60 Mythos, on the downstage and mid-stage trusses, and repositions the complement on the floor, said Guthrie.

Two grandMA2 full-size consoles, one active and one back up, and two NPUs are on hand to “literally run everything that’s moving and changing on stage that’s not the actual band,” he noted. “We control all the lights, the video, the hoists and the scenic movement from the board.”

Guthrie and Chris Lose jointly programmed the show. “I had the show file from Stevie’s last solo tour and Chris had the show file from the last Fleetwood Mac tour he did.  So we combined them to start then built out the file over two weeks of rehearsals at Sony in LA.” Guthrie likes the grandMA2 for its “reliability and feature set.  I’m extremely fortunate to work with a lot of very clever MA users so I’m constantly learning new tricks,” he added.

“The ability for Chris and me to be on the board and programming was a huge advantage.  In a lot of rehearsals I was making adjustments to the file as he was running the show.  I could program content while he programmed lights.  That’s a massive advantage.”

A.C.T Lighting is the exclusive North American distributor of both Clay Paky fixtures and MA Lighting products. For the 24 Karat Gold Tour Thomas Mayer is the Lighting Crew Chief and Cecil Nelson, Matt Schiller and Scott Naef are the lighting crew.