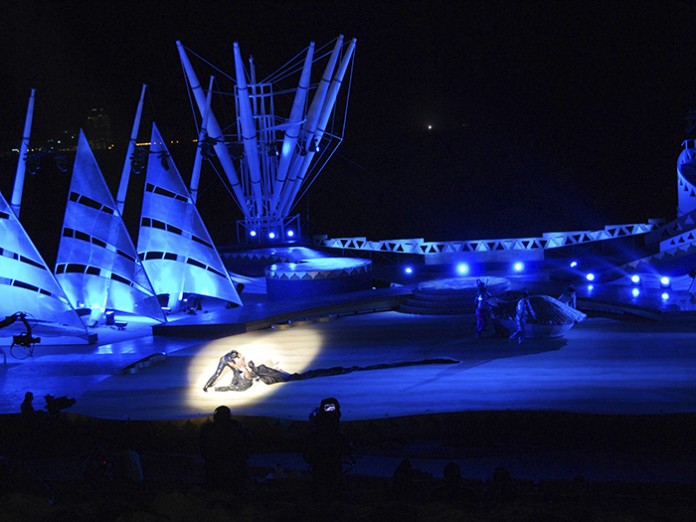 Lighting Designer Massimo Tomasino used Clay Paky lights for Secrets of the Sea; a musical that was the focal point of the Qatar Marine Festival in Doha.

The event was a fusion of Qatari and international music, which stems from a cultural exchange and huge cooperation between local and Italian artists. The composer Renato Serio composed the dance music together with Faisal al Tamimi.

Tomasino cancelled all prior commitments in order to focus on the event, which the Choreographer and Director Gino Landi had already decided to entrust him with. There were several large moving elements on the set, including huge sails, which created a striking visual contrast between Qatar’s recent industrial development and its marine resources and Islamic culture.

It was essential to choose lights with lightweight bodies and extremely wide optical zooms to hang over the stage. A total of 26 compact, lightweight Alpha Spot HPE 700’s, with their fast noiseless movements and electronic focus, were distributed among the delicate scenic sails, along with 26 Alpha Wash 700’s, which have the light output, and graphic and optical performance of higher power wash lights.

Atotal of 22 Alpha Spot HPE 1200s were distributed, some along the front of the stage in order to provide the front lighting, and others between the tower and the set, some distance away. One Spot 1200 in particular was fitted inside the tower to create a lighthouse effect.

The 30 Alpha Beam 700’s were perfectly recognisable even during the brightest scenes and were distributed at the back as backlighting. Their compact, lightweight, highly agile bodies enclose the most advanced technology for projecting beams of light, which may be coloured and shaped as desired for fascinating dynamic projections in mid-air. The beam can be pointed at the audience or used as a dynamic sky-tracer colour changer.

The Clay Paky lights were used for several hours, with temperatures of over 40°C during the day and below 10°C at night.