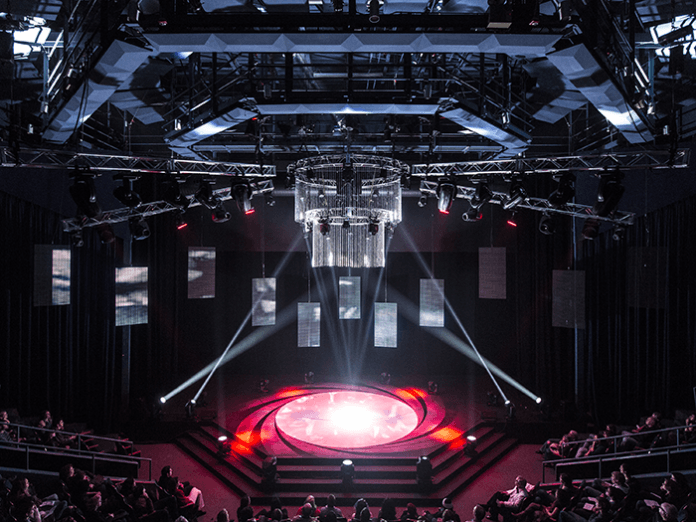 The University of North Carolina School of the Arts (UNCSA) showcased the talents of students in the lighting department at the dazzling 14th annual Photonapalooza.

A.C.T Lighting, a long-time supporter of the event, provided a complement of Clay Paky Alpha Spot HPE 1500, Mythos, A.leda B-EYE K10 and Sharpy fixtures plus a pair of MA Lighting grandMA2 full-size consoles to the show. A.C.T is the exclusive distributor of both brands in North America.

Salem-based UNCSA comprises five schools, all of which participated in an annual two-week Intensive Arts programme featuring special performances and professional seminars and mentoring programmes. The lighting department is part of The School of Design and Production; its Photonapalooza was billed as an evening of multimedia light, projection and friendly competition. It capped a week of seminars presented by lighting vendor and manufacturer partners.

At Photonapalooza senior lighting students and underclassmen showcase short, themed lighting compositions set to music. The event, staged in the Freedman Theatre, was free to the public and included open discussions of the work and an audience vote to determine the winner.

300 people attended this year’s Photonapalooza – the biggest turnout ever for the event. 36 students formed five competing groups, which presented dazzling lighting and projection displays set to music from iconic James Bond films. The winning group, Team NickNack, choreographed their show to the theme from the James Bond film, Skyfall.

“The seniors started talking Photonapalooza with their first class in September,” said Eric Rimes, professor of lighting technology at UNCSA’s School of Design and Production. “They decide on a theme, design the look of the stage and discuss what equipment they might be able to get from our professional partners. It’s very much a student-driven and faculty-guided event.”

“Production is a classroom for us; we’re always doing shows,” noted Norman Coates, Director of Lighting at the School of Design and Production. Lighting students illuminated the South Portico of the White House in October to celebrate a Trick or Treat event.

“We support drama, music and dance at UNCSA but don’t get to pile on equipment for a school rock band,” he explained. “Photonapalooza is as close to rock ’n’ roll lighting and projection as we get.”

Coates said that this year’s event featured more moving heads than ever before. “The quantity of moving lights rivalled that of a small band. Students learned a lot about fixture diversity. They were challenged to grasp the differences in fixtures and how best to use them.”

Students designed two concentric rings of circle truss, which were hung with plastic beads to resemble a glamorous chandelier. Four spokes of moving truss converged on the circle truss; LED screens formed the backdrop of the thrust stage where audience seating was approximately 75th in the round.

Photonapalooza gives students an opportunity to get hands-on time with the latest real-world lighting technology. “We don’t get to use lighting instruments designed to put patterns in the air very often,” said Rimes. “Students were really fascinated by the speed of the Sharpys and by the ability of the Mythos to go from a spot to a wash. They also enjoyed the Mythos technique of using zoom and focus to go from one gobo to another.”

Photonapalooza also afforded students the chance to be introduced, or reintroduced, to grandMA2, which has become the console of choice for many top lighting professionals. “We have used grandMA2 for the last few Photonapaloozas so some students had experience with them before,” Rimes noted. “A.C.T’s Doug Mekanik did a training course for several days before the show; the seniors said it was very helpful in making them feel more confident on the desk.”

“Doug’s training gave the students a real leg up in knowing how to programme a mix of fixtures and combine them with projected content,” said Coates.

Winning Team NickNack devised several innovations using the Clay Paky fixtures, Coates pointed out. “Sharpys were placed around the rings of the circle truss. Team NickNack spun the Sharpys as much as they could around the chandelier, all of them sweeping in one direction, which was a pretty exciting and dynamic move,” he said.

“They also tricked the audience by mixing real Sharpy hits with projections of Sharpy-like strikes on the floor of the stage. That took the brightness up another notch – very exciting!”

Rimes gave kudos to A.C.T Lighting for “helping us push the envelope in terms of equipment”. Coates also emphasised the importance of lighting professionals, such as Mekanik, who spend time working closely with students. “When they come in and talk about what the business is like and how the equipment actually works – that’s invaluable to us,” he commented.

George Masek, Vice President of Automated Lighting, added: “It is always a pleasure for me to attend this event and speak to the students. They are attending this school because they are some of the most creative and talented young artists around – which is easy to see from their work.”