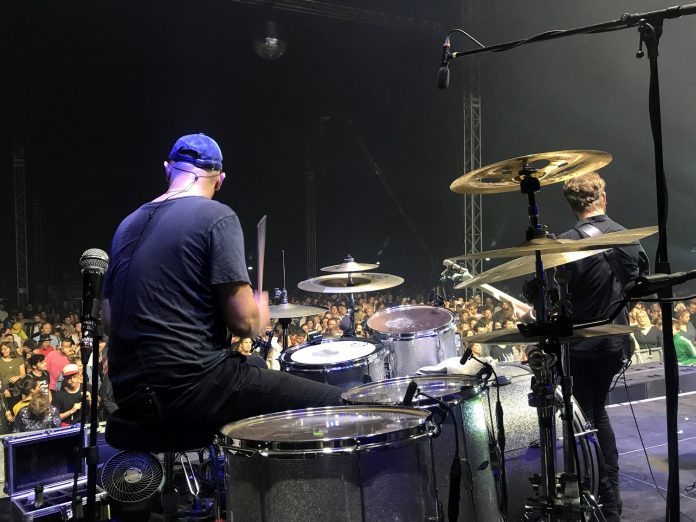 Danish musician and producer Anders Trentemøller will be taking a selection of DPA microphones on tour this summer when he delivers a live set at 20 European festivals.

Based in Copenhagen, Trentemøller is internationally acclaimed for his heart-wrenching melodies, exceptional production and a trademark sound somewhere between indie and electronic. His recent work is driven by a passion for experimentation and succeeds in transcending influences and genres to deliver a much more organic version of his signature sound.

“We are using d:dicate 2011C mics on kick drum, snare drum, hi-hats, drumkit overhead and on the bass amp,” Jakobsen said. “The d:vote Instrument Microphones are being used under the snare drum, on toms and for some percussion.”

Jakobsen began using DPA microphones on acoustic instruments some years ago, but only recently tried them on drums when he was touring with the Danish band Mew.

“I was impressed by the way these microphones, particularly the tiny d:vote capsules, handled loud sound sources,” he said. “The mics we are using on drums for the Trentemøller tour give a true and natural reproduction of the source – very transparent high end, fat low end and they have a clear and flat midrange, which allows me to tweak the tone and transients of the drums to our liking. They also easily handle the high levels and give good separation of the drums.”

His views are shared by Lars Peter Jensen who is mixing in-ear monitors for the band.

“We can have a natural and clean sound in the monitor in-ear mixes, and tweak the channels to shape to our desired sound in the PA mix,” he explained.

Both Trentemøller and Fisker are using d:facto Vocal Microphones on Jakobsen’s recommendation.

“I have used the d:facto Vocal Microphone before and I’m very impressed with its natural and transparent sound, its ability to deliver great detail and clarity and the fact that it handles feedback very well” Jakobsen said. “We play very loud electronic rock and the d:facto allows us to have the vocal right on top of the mix, clean and crisp. Marie is very happy with the d:facto because it captures her voice with a natural tone and its isolating characteristic allows her voice to be loud in her in-ear mix without much bleed from the stage and the room.”
www.dpamicrophones.com