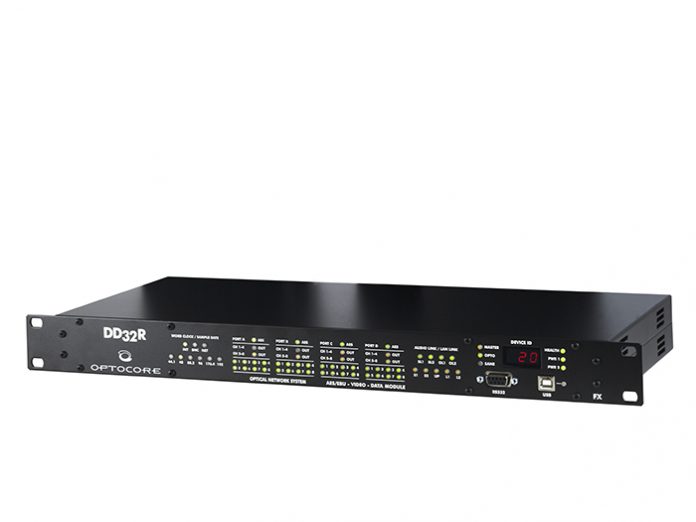 Clair Global has increased its Optocore inventory as the production company gears up for a major, as yet unannounced, 2018 tour.

Having used Optocore DD series solutions for some time, mainly with its inventory of DiGiCo SD series mixing consoles, the Lititz-based company has added a further 6 DD32R FX network converters and pair of DD2FR-FX AES/EBU. Clair Global Console Dept Manager, Jonathan Shober, stated that previously the company had enjoyed a brief experience with an LX4 system prior to utilising Optocore with a DiGiCo D5.

“Our clients continually ask us to push the envelope,” he said. “With regard to the new tour, it was suggested that an audio network be used to distribute the signals to multiple zones. Both parties had previous experience with Optocore, so it was the obvious choice.”

He added that there were a number of compelling reasons for using Optocore — most notably for the transparent transport of audio over the network. “In addition to this the path and length of cable runs was a major concern,” he continued. “The built-in redundancy plays an important part as well. Also, it is possible to easily integrate these devices within the DiGiCo implementation of the network. Lastly, having the ability to effectively monitor the status of all devices within the network, using the Optocore control software, is an added benefit.”

Shober said that, throughout the process, Clair had received strong support from both the German and North American offices. “Towards the end of 2017, both Marc [Brunke] and Maciek [Janiszewski] travelled to Lititz to demo the product line. Then in December the sale was announced, and we happened to have a need for it.”

“Our past success rate with the brand gives us the confidence we need to feel comfortable tasking it with one of the most crucial parts of the control system — audio distribution to the PA,” Shober concluded. “In fact, fibre optic technologies are used so regularly within our Audio Touring and Data Services divisions that we’ve now invested in the equipment necessary to terminate our own cabling.”