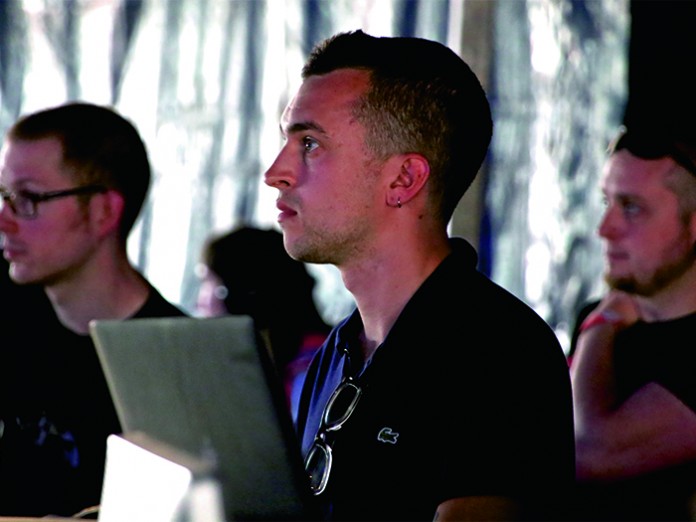 What was the catalyst for you joining the industry?

What was your big break?

In my third year, I got a placement with Lighting Designer, Brian Leach. I’d been going to gigs and noticing how cool the lighting was, and I started to really consider music instead of just theatrical lighting. Brian asked If I wanted to go on a tour. I said yes straight away and the tour just happened to be with The Streets. I turned up on my first day and it suddenly dawned on me that I was the only person looking after the lighting – I was the operator / tech and programmer. That was my first big break. My first pro gig was at Glasgow Barrowlands and a drink went on the desk! I thought I was going to get fired but I stayed with them for almost three years!

What have you learnt from touring and how has your role adapted over the years?

When you’re young and still studying and someone offers you a tour, you think it’s great. And it is, don’t get me wrong, but no one tells you about what happens when you get older and touring isn’t something that you want to do for nine or 10 months of the year. A big learning curve I went through is what I’m developing now; learning how to adapt how I work as a designer by touring less. For example, with Everything Everything, I designed their recent show but I’m not touring it. Now I tend to design for a portfolio of clients, do production rehearsals, help get it up and running and then hand over its operation to other people. I also designed Jungle’s last tour, and I didn’t go on the road for that.

What’s your current desk of choice, and does that alter if you’re handing your designs over?

High End Systems Hog 4. I really like it because all my cues go on cue stack and with the Hog I can see it all really clearly. It’s a great desk for tracking and cue-based shows so it works well for me at this point in my career.

Ben Houghton, does a lot of operation for me – including Jungle – already knew the Hog when I was brought in to design their show, and we ended up programming it together. He’s great, he’d been with the band since their very early days, their second ever gig in fact, when he was just 18!

Sounds like you’ve encouraged his progress… have you had a mentor yourself?

In the early days, Brian Leach really helped me out and I’m really thankful to him for that. I always wanted to do my own designing and he supported that by giving me the chance to tour.

Indirectly, I would say that Rob Sinclair is someone that I look up to professionally. He has an amazing eye for design. I have quite a lot of friends who are LDs too, some of us are in a WhatsApp group where we support and guide each other. Dan Hill is someone I have always bounced ideas off and have a lot in common with design-wise, we’ve actually decided to form a company together and combine portfolios. This will launch in 2016.

How do you continue to win new clientele in such a competitive industry?

I got the contract with Years and Years because they’d seen my Jungle show and they wanted to work with whoever did that. Their album artwork wasn’t finished at the time but when I saw it, I knew it needed to become the lighting set for the set design. I met with Light Initiative to help create this set piece, and they did such a good job. It’s an exciting, fun place to visit. It’s sort of like a mad yet brilliant LED lab!

I also brought Adam Young on board who I’d worked in the past on Bombay Bicycle Club’s tour. We came up with all the concepts stemming from the artwork imagery. Years and Years is the ‘poppiest’ thing I’ve ever done and I finally got to put a rainbow into a design! It came together very organically and it’s going into arenas next year so I’m sure Light Initiative will run away with it in the best way possible.

You’ve worked with Neg Earth a lot. What keeps you going back?

Neg are brilliant. Julian Lavender and Amanda Liu are a massive support – and they were even amazing after they encountered their warehouse fire. I can’t speak highly enough of them.

What key skills do you think LDs need to see success right now?

Being realistic with space and budgets. If you design something that someone can’t afford, it’s a waste of time. Budgets are getting tighter and in a way that forces me to become more creative. Every design I’ve worked on has had a custom set piece and I think that can give a unique edge.