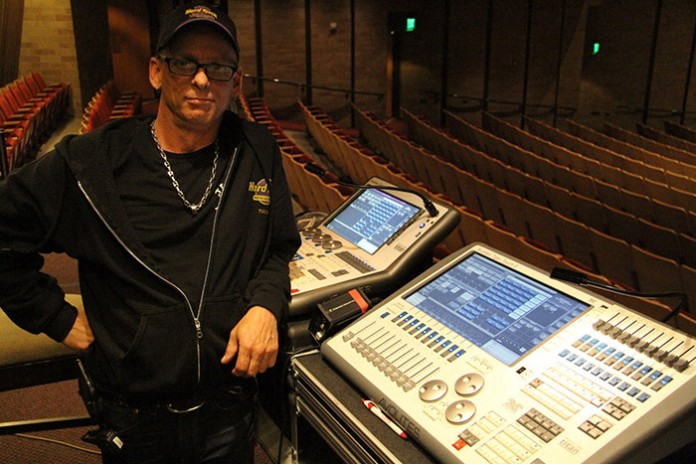 Chris Maguire is not a guy who is known for going small. He has lit some of the biggest, loudest bands in the rock pantheon, including Ted Nugent, Cheap Trick, Foghat, Accept and KISS frontman Paul Stanley’s Live To Win tour. But right now he is out carrying an Avolites Tiger Touch II, plus an Avolites Quartz as a backup in his carry-on, lighting YouTube sensations 2CELLOS on a tour that proves that small does not mean meek.

“I wasn’t even going to take the gig when I first heard the name 2CELLOS,” he laughed. “I thought, ‘What am I going do with a couple of cellos?’” A legit question for a guy who had spent 11 years lighting the Motor City Madman and seven years with Cheap Trick, including their Vegas residency doing The Beatles’ Sgt. Pepper’s album at the Paris. “But even though it’s two cellos and a drum kit, it is bigger than you can even imagine.”

It’s a story that sounds more like a TV movie than reality. Croatian cello prodigies Luka Šulić and Stjepan Hauser graduated from prestigious UK music colleges in 2011. Both had a pile of international awards and could have—and, indeed, would have—been expected to go to work with one on the major symphonies they had already performed with. Instead, they made a video of their own arrangement of Michael Jackson’s “Smooth Criminal,” which went viral with more than 15 million views before they even established an official YouTube channel and now has more than 30 million views. And that’s nothing compared to their video of AC/DCs “Thunderstruck”, which has been viewed more than 57 million times.

Maguire started with 2CELLOS doing the US portion of the tour in 2014. He has been a self-proclaimed “Avo guy” for his entire career and used an Expert and Pearl on the last trek. This is his first outing with the Tiger Touch II, supplied by Toucan Productions.

“The screens just made everything so much easier to access,” he described. “I went in and updated my focus—22 songs—and got everything done in less than a half hour. I have used Avos for years and always loved them, but on the older stuff, that was a process that literally took several hours.”

Being a rock and roll road warrior, it is no surprise that while he appreciates the increased creative abilities of the Titan series—especially when married to modern LED fixtures—his real focus is on the nuts and bolts of making the show happen.

“I love the footprint and size of the Tiger Touch II. I have the Quartz as my backup and can network them together. So every change and edit I make on the Tiger Touch is mirroring right into the Quartz. I don’t have to make any additional moves or take any extra steps. It’s just there if I need it. If something goes wrong, I have the show on both consoles and would just need to pop lines out of one and into the other to be back in business in a couple of minutes. And I love the fact that the Quartz fits in my suitcase.”

This brings a level of confidence and comfort that has never been possible. “Even on the older Pearl stuff that I used for many years, switching from one console to another was not that easy. But the way the Tiger Touch and Quartz network together and talk to each other, it’s just beyond simple.”

As good as the current tour is going, Maguire sees nothing but growth in the near future. “These guys are just climbing the ladder. Right now I carry probably 48 fixtures total, including LED hot boxes in the towers to light up truss for me. For next year’s tour, they want to double it. They want to go with arena-sized stuff, which means I may be moving up to a Sapphire Touch.”

Another aspect that Maguire calls out as a welcome change is the intuitiveness of the Tiger Touch II. “Patching, shape generation… everything is just easy. And you don’t have to tell the console 60 things to do to achieve a result. You just tell it what you want to achieve. One time. And it’s done. On other consoles, you have to break down every step and tell the console what to do—and what not to do—over and over. With the Tiger Touch II, I have a starting point and I tell it where I want to get to and it just does it. I don’t have to go back in and edit and add or subtract steps from the process. It is just so simple.”

Maguire is bringing some of the people he tours with for other acts out to check out the sensation that is 2CELLOS. “The tour is going great. We are selling out every room and it is starting to feel like the rooms are small. We’ll be going bigger next year.”

When Maguire is not working with 2CELLOS, he works as the stage manager for REO Speedwagon. “I brought my production manager for REO out to a show the other night. He never comes out to shows but I told him he had to see this. This is two classically-trained musicians and they start out playing Bach, and then the next thing you know they are into AC/DC’s “Thunderstruck” and the crowd is on their feet. When the show was over he told me he was blown away. He said he just couldn’t believe what came out of two cellists and a drummer.

“And it’s an appropriate response. Because I can’t believe what I am able to do with a console as small as the Tiger Touch II and a Quartz backup that literally gets packed into my suitcase.”