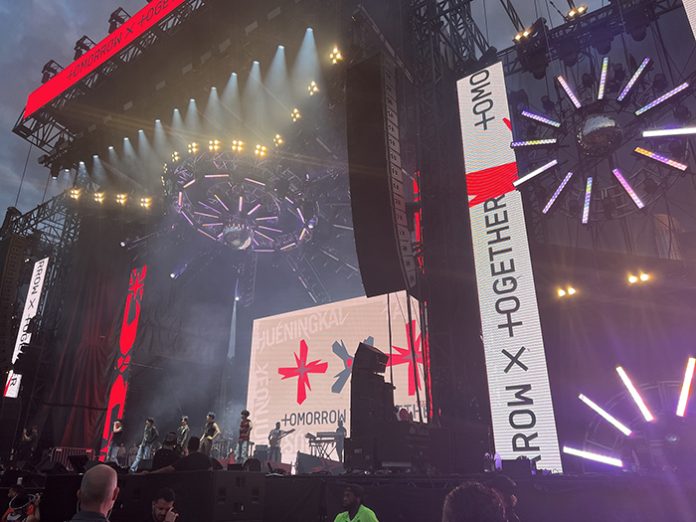 It’s been a busy year for lighting and production designer Chris Lisle and his company CLLD. The production design firm recently wrapped up work on Lollapalooza, their sixth major event back to back, and turned to an Elation rig, including Proteus series IP65 luminaires, to light the festival’s popular Perry’s Stage.

“Weather is one of the biggest factors we face on a festival and if I can predominately get IP65 fixtures in a rig I have a better guarantee that they’ll be working day after day,” Lisle stated. But, he adds, it’s not all about the IP rating. “I also want something with a feature set that I know LDs will like—solid colours, a good gobo package, nice strobe, fast fixtures—something I know they will be happy with, can clone quickly and then are good to go.”

Over the last 30 years, Lollapalooza has developed into one of the most iconic music festivals on the summer schedule. Flanked by a towering skyline and the shores of Lake Michigan, this year’s festival took place July 28-31 in Chicago, its permanent home since 2005. Produced by C3 Presents, some 100,000 revelers filled Grant Park each day for a celebration of live music across nine stages.

Lollapalooza 2022 was Lisle’s fourth year working the event and CLLD fulfilled several roles. On the festival’s two main stages, Lisle and his team worked with headliners to mesh each act’s touring rig with a festival lighting plot that CLLD had created earlier in the year (one used on several festivals that C3 produces this year). For EDM and dance music fans however, the Perry’s Stage is where the action is and here Lisle served as production designer, developing the entire visual concept and look of the stage.

“As an EDM stage, it’s really a chance to be creative from top to bottom,” the designer said, explaining that very few acts on the Perry’s Stage will bring in anything other than a floor package. “I had the opportunity to create a design that filled the entire space—on stage as well as the wings—with LED video and lighting. EDM is a visual heavy genre of music and as a production designer I look at how the lighting and video plays together structurally and visually.”

Lisle says that many headliners carry their own specific video content so he usually starts by creating a 16:9 video wall or similar on the upstage. “I begin there and then start layering truss, other video product and lighting,” he said, explaining that this year on the Perry’s Stage he went with a circle concept. He describes the look. “Over the main stage were two truss circles that sat within each other and off of those were ten fingers. In the center of the circles, and the key focus of the stage above the video wall, was a large mirror ball. On the sides, we accented with more circles flipped vertical to face the audience with a mirror ball inside. The setup was all layered in with video columns.”

The workhorses of the Perry’s Stage lighting system, supplied by 4Wall, consisted of 96 Proteus Hybrid moving heads populating the finger trusses and out on the wings, along with 27 Proteus Maximus with their 50,000-lumens of power used for key light on stage and as workhorse fixtures on the larger circle. Both the Proteus Hybrid and Proteus Maximus are advanced moving heads with CMY colour mixing systems and complete FX systems that provided headliner LDs a myriad of choices, as well as CLLD programmer and operator Aaron Luke who handled lighting for many of the day’s early acts that did not have their own LD. He also worked together with content creators to ensure that fixture colors matched with video.

“Most of the rig was IP65 and held up like it should,” Lisle said, “but we still had some non-IP65, non-Elation fixtures exposed on the wings of the stage. Lesson learned. We got hit with a rainstorm and couldn’t cover them in time and lost about half of them.”

Lisle says that lighting vendor 4Wall was “fantastic” with a system that was very well prepped and laid out and a crew that worked hard. “It was one of the smoothest shows I’ve had this year,” he said. The designer concludes by expressing how happy he is to be back and busy and how good it is to see crowds out there again, dancing and having fun.