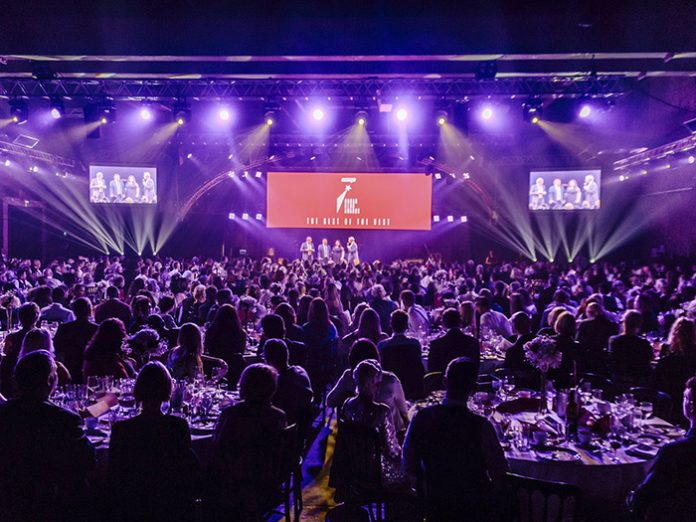 The Urban Hero Awards is an annual event bringing together people of all ages for their inspiring work and leadership within their local communities. For this year’s event, which took place at Manchester’s Victoria Warehouse, Jonny Billitt was tasked with providing visual support for the evening. This included an awards ceremony dinner with accompanying live music performances.

Performing key lighting roles in Billitt’s overall illumination concept were the Maverick Wash and Hybrid fixtures, and Rogue R1 Beams, which fulfilled a variety of roles including front and ambient stage lighting during the entire event.

“I was extremely impressed with both the Maverick Wash and Hybrid fixtures,” commented Billitt. “While the wash fixtures provided incredible saturated ambience on stage as well as stage effects for performances, the spot and beam combination of the Hybrid fixtures allowed me to create punchy aerial effects to accompany both the awards and musical interludes.”

Billitt also positioned the R1 Beam fixtures across a 14-metre diameter trussing module at the back of the stage at 45 degrees to beautifully frame the stage. The geometric shape of this feature created an incredible visual design with only simple pan and tilt effects and shutter chases.

Another key element of Billitt’s visual setup was a back wall consisting of over 100 PVP S5 LED panels. The bright, versatile, and cost-effective modular video panel enabled live and recorded video content to be played during the various awards.

This was framed by the Chauvet Next NXT-1 fixtures that, combined with the 25 RGBW LEDs with a six-degree beam angle, provided Billitt with an interesting tool to create unique and punchy states and effects on stage using the built-in pixel map engine of the ChamSys MagicQ software and built-in effects of the fixtures themselves.

“With the video wall, R1 Beams and Next NXT-1 fixtures, I was able to construct an exceptional visual centerpiece on stage,” he continued. “The beams and unique square LED arrangement of the NXT-1s added depth and diversity to the overall visual aesthetic, and added to the harmonious base presented by the Mavericks.”

To provide ambient illumination within the room and on the tables for the dining guests, Billitt specified the collection of Rogue R2 Wash and Spot fixtures.

“I was able to use the combination of Rogue fixtures to create dynamic, textured and ambient looks on the guest tables, which provided the perfect lighting coverage without emitting any undesirable heat,” he continued. “Furthermore, the Rogues served to provide multipurpose effects for award presentations and a subtle array of ambient lighting within the venue itself, thus helping to transform the cavernous venue into something much warmer and inviting.”

Thanks to Billitt’s varied selection of Chauvet Professional fixtures, the various demands of the evening – from awards ceremony and live music venue to fine dining – were dealt with professionally and effortlessly.

“The Chauvet Professional fixtures enabled me to set the tone for the evening,” concluded Billitt. “I’m very proud to have played a key part in designing the awards and being a part of supplying a fantastic event for everyone attending the evening and most of all the award winners themselves.”