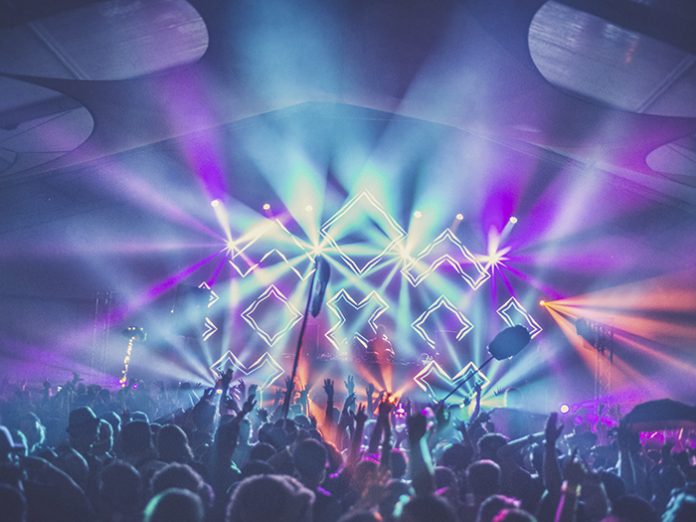 The Antic Studios team used 43 of the 5.2mm pixel pitch panels to create the wall, which was divided into variously shaped geometric sections arranged on truss behind the DJ booth. At the centre of the video display were two large panel configurations: one diamond shaped, and below it one arranged as an X. Flanking the X panel on either side were two smaller diamond shaped sections. The perimeter of the wall was made up of six V-shaped configurations.

Forming a semi-circle around the centre panels, the V-shaped units created a sense of movement across the stage without diverting attention from the performers, an EDM star-studded group that included Shiba San, SNBRN, Jackal, Manic Focus, Exmag, Liquid Stranger, Artifakts and more.

The Antic team used Adobe Illustrator to create a pixel map that matched the resolution of its LED panels and followed the stage designs layout. The pixel map was then imported into Adobe After Eﬀects and used as a template for the animations. The image was calibrated in LED Studio, and the signal was converted through Chauvet Professional VIP Driver, which was then linked to a signal distributor on stage. All of the content was converted to DXV3 and then mixed in Resolume Arena 5.

To add extra impact to the Vibe Tent Stage and fill negative space, the Antic team brought 12 Rogue RH1 Hybrids to the festival. The Rogues, which were mounted on the side braces of the tent and were run by Herm Productions, provided aerial and audience lighting as well as color stage washing.

“By adding the Rogues to the video panels, we created an EDM club atmosphere inside the tent,” said Warffuel. “Our goal was to make this tent look different and give it a personality that stood out in this diverse festival. Our team members Derrik Kehler, Brandon Rathke and Joseph Vanderwiel worked hard to make this happen.”