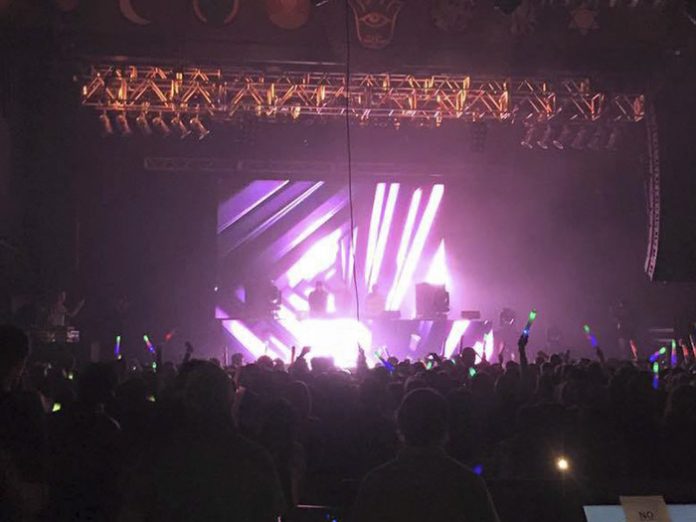 Boston’s House of Blues hosted Electric Bounce House, with a light show held together by two two large video walls built by Image Production Services of Worcester, MA, using CHAUVET Professional MVP Ta8 Curve LED tiles. Although it holds only 2,500, the concert hall welcomed an Electric Bounce House lineup of artists who often would be playing at an arena or amphitheatre.

Image Production Services used 80 of the 8.3mm pixel pitch panels to construct a large wall behind the DJ booth, where The Chainsmokers and Cash Cash were often to be found during their performances when they weren’t prowling the stage. In front of the booth, the company built a narrow video wall strip using the MVP Ta8 Curve tiles.
The two walls did far more than present branding text for the performing artists. Displaying content created by the artists’ video designers, they transformed the room with a never-ending variety of breakout patterns, including vortexes that pulled all eyes into centre stage.

“Tim McKenna and his crew did a great job setting up the walls,” said Darren Lussier, owner of Image Production Services. “The thing I like about these tiles is that they have very good resolution and they’re very bright.  You can create very intricate patterns and text, and they will show up clearly. At this concert, with its very intense rig, plus a packed house with everyone waving glow sticks, the video tiles needed to be bright to show up – and they were that and more.”

Contributing to the brightness that surrounded the video walls was the floor package for headliners The Chainsmokers that featured Rogue RH1 Hybrid and R2 Wash fixtures, as well as STRIKE 4 multi-formatted fixtures from CHAUVET Professional. Aaron Kovelman, Lighting Designer for the red-hot duo, used six of the Rogue Hybrids and an equal number of the washes, plus four of the STRIKE units in his eye-popping rig.

Kovelman flew the Rogue RH1 Hybrids on upstage truss that he positioned in line with the DJ booth and configured as a semicircle arch. The intense output from the hybrid fixtures created a halo effect around The Chainsmokers and coordinated with the colours on the PVP X3 panels that flanked the booth. At some points during the concert, the fixtures directed their beams out at the audience on both levels of the room.

Adding to the intensity of the evening were the four STRIKE 4 panels that Kovelman placed on top of the DJ booth and used for strobing and warm white washing. The six Rogue R2 Washes in his rig were flown on mid-stage truss and used for stage and aerial washing. Like the artists on stage, the lighting floor package, along with the video walls, filled the compact concert hall with a big time sense of excitement.