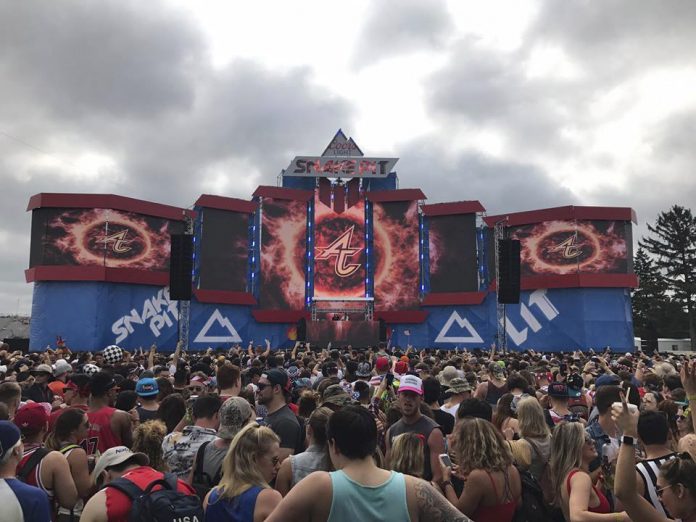 Long before the cry “Drivers Start Your Engines” marked the start of the 101st Indianapolis 500 at 12:14 pm on Sunday May 28, over 30,000 EDM fans at the iconic speedway were already racing through some slick bangers at “The Snake Pit Presented By Coors Light.” Held on the track’s infield at Turn 3, this one-day festival within an auto race kicked off at 7 am and kept going until the checkered flag was waved trackside. Accenting the performances from the likes of Zedd, Marshmello, and Adventure Club at this year’s event was a Collyns Stenzel designed light and video show that relied on Chauvet Professional COLORado fixtures to help it stand out against the Indiana sun.

“This is my third year designing this show,” said Stenzel of White Light AV. “It’s fun to see all these fans have the time of their lives in a unique setting. However, there’s also a challenge because the entire festival takes place in the sunlight. This is probably the only event I have ever been involved in that opens before sunrise and ends before sundown. Every year we and the team at CSP (Chris Schroeder Productions) push it a little harder, make it a little bigger and add just a little more ‘lit’ to it.”

“The video wall was super bright to stand out in the middle of the day,” said Stenzel. “I needed lights that could work with this wall and help me give it some framing and architecture. The actual bodies of the COLORado battens worked very well to stand out against the video tiles when the sun shined on them. The dual lenses of these fixtures helped catch the glimmer of the sun. Also, the colors we got from the COLORados were rich enough and bright enough to show up in the daytime and add to the texture of our stage.”

Throughout the 10-hour concert, the video wall displayed custom content that married the concert’s EDM vibe with the automobile race going on around it. “Morgan at MELT Creative brought out some great custom content for the big screens,” said Stenzel. “The realistic colours we got from the COLORados worked well to support the video content. We created a richly coloured environment.”

Since the festival was held outdoors at the “unofficial start of summer,” Stenzel was very selective about the fixtures he chose for his rig, as the sunlight makes it difficult for most effects to be seen. Aside from his COLORado Batten 144 Tours and video wall, his gear was limited to a small number of strobes, fog machines and pyro effects.

“Our options were fairly limited since this was a daytime only show,” said Stenzel. “Most of the visiting LDs didn’t get involved because of the daytime factor. But we designed with the daylight in mind, so we got some good colourful looks. At the end a lot of the people involved in the show gave us high fives, which felt good.”