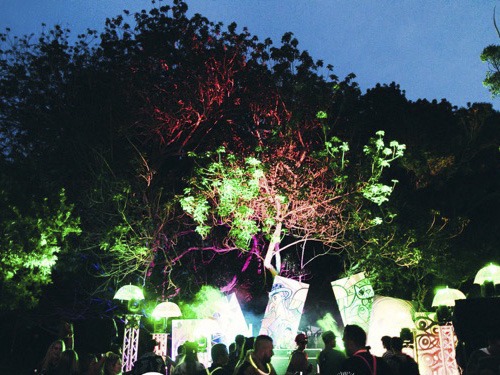 The Bush Doof festivals have a long tradition of cultivating and engaging a collective social conscience through music. The Road Trip to Bush Doof is one of the most popular contemporary incarnations of this tradition. Serving up a sizzling variety of electronic and bass music parties, the event has built up a large and loyal following among locals and visitors from throughout New Zealand and Australia.

For this year’s event, which featured international heavyweight drum ‘n’ bass DJs such as KOVEN and Kadington Live, organisers decided to up the production by giving fans an upgraded visual spectacle. To this end, local production specialists Tron Audio specified Chauvet DJ Intimidator Hybrid 140SR moving heads for the festival.

Positioned on flight cases and truss totems of varying heights around the central DJ podium and arranged in a V shape, the 140W spot, beam and wash fixtures created a strong visual focal point. Light from the Intimidators also helped to accent the stage’s thick foliage backdrop, giving it a magical look.

“Although Bush Doof has a really DIY vibe, we wanted to elevate the festival this year by improving on certain production elements such as providing exciting visuals,” commented Taylor Brodie, Production Manager at Tron Audio. “The mixture of Chauvet fixtures allowed us to achieve some exciting visuals, whilst still retaining the authentic vibe of the festival.

“There’s no doubt about it, the Intimidator fixtures were instrumental in forming a central element to our visual concept, the V formation really drawing attention to the DJs,” continued Brodie. “Despite their ultra compact size, the fixtures are super bright and have incredibly punchy colours. They could be seen from all around the festival site and acted as an excellent navigation system for people wanting to locate the stage.”

In specifying the Intimidator Hybrid fixtures, the light show was effectively able to have all the benefits of spot, wash and beam features within one convenient package. The added benefit of effects such as control, prisms and gobos for intense mid-air projections further enhanced the production.

“We enjoyed having the flexibility of the Hybrid fixtures, as we were able to constantly play with different beam and spot effects to whip up visual energy in support of the DNB music,” said Brodie. “To have this three-in-one package also ensured we didn’t have to specify any other moving heads, and as such, the festival was able to keep its trademark DIY and underground feeling.”

“The STRIKE fixtures gave the whole DJ podium the look of a classic rave,” he explained. “Not only could we offer excellent audience blinding and strobe effects in abundance, the tungsten emulating look provided a gorgeous warm white wash – a contrasting look to the energy of the Intimidators.”

Thanks to Tron Audio’s incorporation of the Chauvet fixtures, the Road Trip to Bush Doof received an incredible visual platform upon which its drum ‘n’ bass music could be supported. What’s more, the spontaneity and DIY ethos of the festival was affirmed. “With a relatively simple lighting rig, we were able to create an even better atmosphere this year for the audience,” concluded Brodie.