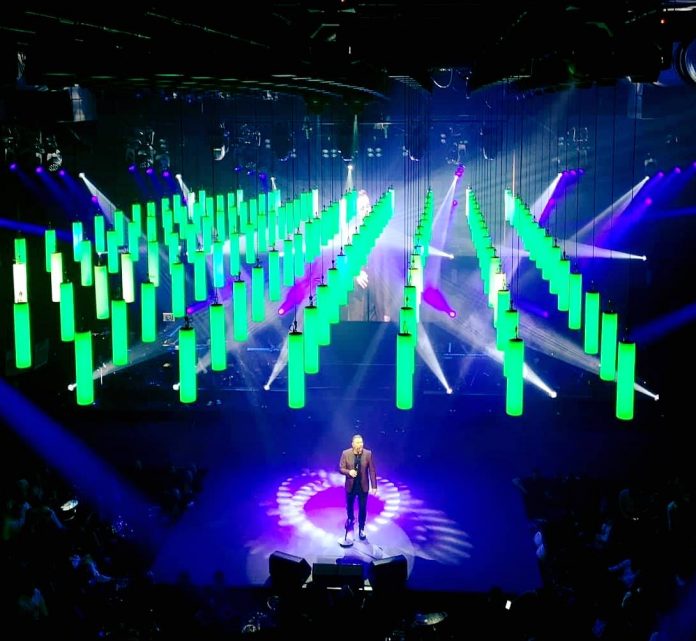 Over 2,300 years ago Cassander of Macedon founded a city on the northwest corner of the Aegean Sea. Blessed with a gentle climate and beautiful scenery, the settlement became home to a thriving theatre community in the ancient world. This tradition continues to the present day, as Thessaloniki, Greece’s second largest city, has established itself as a leading entertainment centre in the eastern Mediterranean with a thriving nightclub scene, a highly regarded film festival, popular theatres and a seemingly never-ending schedule of live music concerts.

Indicative of the city’s current entertainment panache was the winter concert series at the Pyli A Performance Stage, which featured world-class entertainment and stunning patterns productions. A highlight of the series was a concert by multi-platinum contemporary Laïkó singer Antonis Remos. Supporting the legendary star’s passionate performance was a majestic George Porros-designed light show that immersed the audience with a stunning display of 144 overhead light tubes.

Suspended over almost the entire stage and extending out over the audience stage left and stage right, the tubes created an impressive image. Constantly morphing into different configurations as different tubes were turned on and off, the overhead display changed the entire look of the stage to reflect different aspects of Remos’ music.

Kiriakos Dimitriadis of Audiotech controlled this overhead panorama with his ChamSys PC Wing and dual DMX. “We used the ChamSys for pixel mapping, and to control the tilt and intensity of the tubes,” said Dimitriadis. “I have been a ChamSys user for nine years. It is a very friendly tool that makes it easy to navigate my way around any show, even when I don’t have a lot of time to prepare, which was the case with this concert.

“The light show for Antonis Ramos was rather elaborate with a lot of different angles and patterns. For this concert, my ChamSys PC Wing helped me plot a lot of the fixtures and hold the focus. It also was very convenient in remote in terms of controlling fixture positions, which was important, since the designers gave this show a great many special looks. The MagicQ software was excellent for controlling the fixtures.”

Playing a key role in creating those engaging looks were the geometric patterns of beams and lasers (created by laser designer Tsitsanis Themis) that changed continuously, and often dramatically, throughout the show, giving the stage very different auras to reflect the wide emotional range of Remos’ music.

Many of the geometric patterns were pre-programmed, but Dimitriadis added some just prior to the show. “ChamSys is very easy to work with, so it allows me to add looks quickly to a show,” he said. “All the functions I need to control a show are right there at my fingertips. The layout options are very user-friendly, and the fader options allow me to control some cues with great speed. The Fast Panic button for correcting mistakes was a big help.

Regardless of when they were programmed, the elegant and complex patterns of floating tubes of light and lasers gave the concert a transformative three-dimensional quality. In so doing, they added an ethereal quality to this timeless concert setting, making the music of this Greek national treasure all the more evocative.