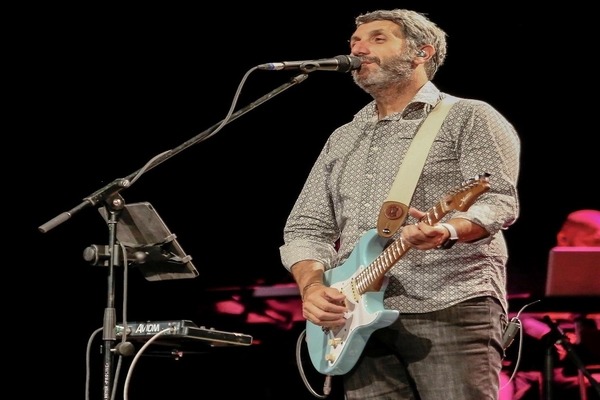 Marco Caviglia, vocalist and guitarist with Dire Straits Legacy, has turned to the DPA d:facto Vocal Microphone for all of his live performances.

“This amazing microphone is engineered especially for onstage vocals and holds a super cardioid capsule that reproduces every nuance of the human voice, transparently, consistently and thrillingly. As soon as I tried it I knew it was the microphone for me – the results were so good that it is now my first choice of microphone for all my on stage performances,” Caviglia said.

Caviglia first encountered the d:facto Vocal Microphone when he was working on a new album at Forward Studios in Italy. The studio engineer recommended it for live work, so he approached DPA’s Italian distributor, M Casale Bauer, and arranged a demo.

“Like traditional super cardioid microphones, d:facto enjoys high side and rear rejection with a minimum of 9_dB attenuation to the sides,” he says. “What makes it unique, though, is its wider acceptance angle at the front. This is identical to a first-order cardioid at 60 degrees off-centre, resulting in the same work field as a cardioid but with extremely high and uniform side and rear damping. This really makes a difference because the less desirable aspects of a super cardioid do not bind the microphone like the uncontrolled and nonlinear rear lobes, which can create feedback from stage wedges. To put it simply, this microphone is great!” Caviglia added.

Since 2010, he has been an integral part of Dire Straits Legacy (formerly Dire Straits Legends), a concept show that celebrates the music of Dire Straits and includes musicians such as John Illsley, Phil Palmer, Alan Clark, Mel Collins, Jack Sonni, Danny Cummings, Pick Withers and Chris White – all of whom have played on Dire Straits’ iconic albums. They now regularly perform at stadium and arena venues and festivals around the world and at corporate events.

“I am very lucky to have the opportunity to be on stage with my heroes and to celebrate the legacy of Dire Straits in front of thousands of fans. When I first decided to switch my microphone to a d:facto, my Dire Straits Legacy sound engineer Maurizio Nicotera was a little bit worried because he wasn’t sure how it would perform with Steve Ferrone on drums behind me. However, he didn’t need to be concerned because the d:facto was easily up to the task. Even with challenging sound pressure levels, the d:facto’s 160 dB SPL threshold, three-step pop protection grid and best in class low handling noise gave us excellent sonic reproduction with all the detail and balanced linear phase and frequency response we needed for a great sound,” Caviglia concluded.