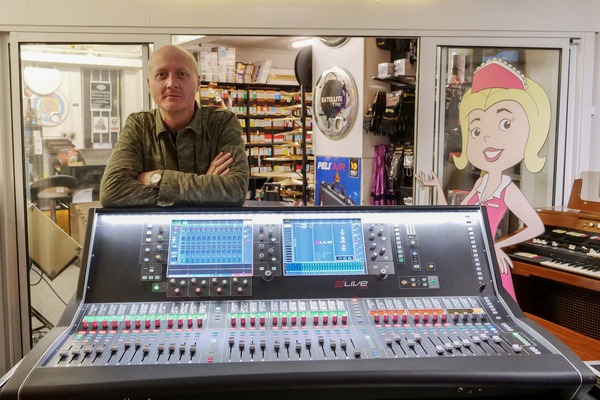 Allen & Heath has announced a partnership with Cato Music, which will see Cato’s South West London rehearsal studios and production facilities outfitted with an extensive array of Allen & Heath products, from QU series consoles to the flagship dLive mixing system.

Cato Music, a Production Park company, offers an all-encompassing tour production service – from market-leading rehearsal studios (including full production), transport and crewing to equipment rental and tour supplies. Its initial involvement with Allen & Heath’s dLive series came at SXSW 2017. General Manager Ant Forbes explained: “We first became aware of dLive in the run-up to SXSW, where Cato Music runs the production and stage operation at the British Music Embassy, at downtown venue Latitude 30.  We used two S7000 surfaces and one C1500 surface in the venue this year – with 75+ artists playing the stage over the course of the week there were a great many different engineers using the console for the first time and all left highly impressed.

“Since SXSW, we’ve added Allen & Heath GLD and Qu series consoles, as well as dLive C and S Class surfaces and MixRacks to our rehearsal facilities” he continues, “and become something of a home-from-home for Allen & Heath gear. We have a huge amount of seasoned and up-and-coming engineers through the Cato Music studios each year, so we’re well-placed to offer a meaningful hands-on experience to newcomers to dLive, and to cater to the increasing number of engineers who are requesting the systems.”

Christian Luecke, Allen & Heath’s Sales and Marketing Director commented: “We’re delighted to have Cato Music using such an extensive selection of Allen & Heath equipment in some of the best rehearsal studios in the UK. It allows engineers and bands a unique chance to become acquainted with the products in a working environment and we’re looking forward to growing the relationship going forward.”