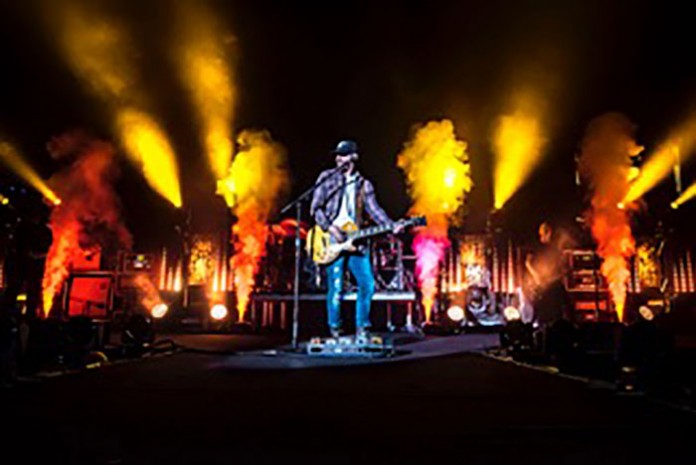 Rising American country music star Canaan Smith has been touring with Robe Pointes and LEDWash 600s, specified by lighting designer Sooner Routhier, whose objective was to create a fresh and vibrant look for each show on the first US leg of the artist’s ‘Stompin’ Grounds’ tour, also his first full headlining venture.

Visiting a variety of different sized venues, Sooner’s starting point for the design was a series of corrugated, metal, graffiti art pieces in set carts which are positioned onstage. These were inspired by artwork that Canaan had created on his smartphone, bringing a real personal touch to the performance space.

The 12 x Pointes and 8 x LEDWash 600s were also rigged on the set carts and in various other positions on the floor and overhead trusses to get a good mix of focus positions. Pointes were chosen because they are a small beam / profile luminaire that “gave me masses of looks and still packed a real punch” said Sooner, adding that they are also perfect for a band-and-trailer tour because of their size and versatility.

She reckons she used just about every feature on the Pointes which were looked after on the road by lighting director Tim Creedon. As they programmed the show together at the start of the tour, they came up with a myriad of different ways in which they could use the Pointes in every song. “Sometimes they looked like beams, sometimes like wash lights – the sheer range of looks is incredible,” she stated. The multiple prism effect is a favourite.

The LEDWash 600s were general illumination ‘workhorses’ and were also stretched in terms of functionality as much as possible, just like the Pointes. They were used for every permutation of colour, plus colour effects and chases through the individual rings. Sooner started using Robe products in her work about two years ago and said: “They are amazing – durable, bright and with a fantastic array of options.”

Among her favourite profiles to use right now is the BMFL Spot, “Robe is really pushing the envelope with the amount and variety of tools being created. Using these fixtures really adds depth and diversity to any lighting package.”

The most challenging aspect of the Canaan Smith tour so far has been dealing with some of the smaller venues on the itinerary, in relation to fitting lighting and scenic elements into the spaces. Difficult though this can be, personally she loves designing for this level and size of production: “It’s always fun and good for the brain to have to make something amazing out of a smaller amount of kit.”