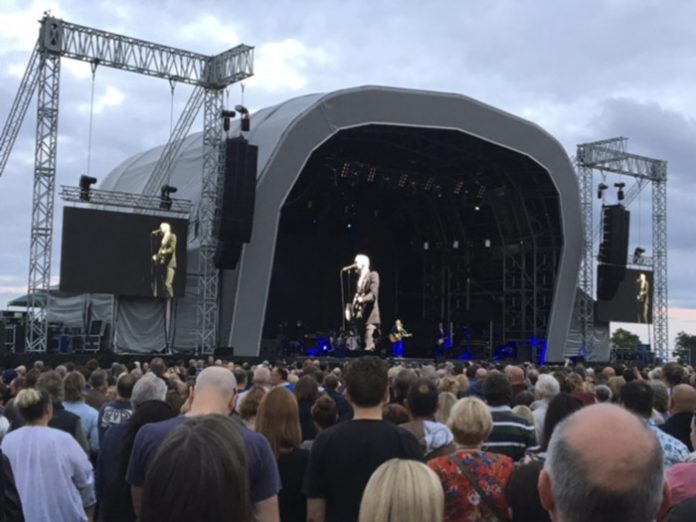 Bryan Adams is the latest touring act to hit the road with Adamson E-Series and S-Series loudspeakers.

The Canadian performed a series of special outdoor dates this July at Powderham Castle, Exeter, Sixways Stadium, Worcester, Bitts Park, Carlisle and Bught Park, Inverness. The shows promoted by LCC Live were a continuation of his on-going Get Up tour.

The tour featured a full complement of Adamson E and S Series loudspeakers. The large outdoor shows utilised left/right hangs of 9 E15 line array enclosures per side with four S10 under hangs per side. Another 16 S10’s were used on delay towers or as side hangs depending on the venue together with 16 E119 subs, all powered with Lab Gruppen 20K44 amplifiers.

Systems Engineers Douglas Martin, Aidan Thomson, and Graeme Brown from The Warehouse created the system design and worked with Bryan Adams’ audio team to deliver a consistent great sound over the four nights.

“Last summer we did a series of similar shows using another brand of loudspeaker system that Bryan Adams would normally use. We decided to pitch the idea of using Adamson E15 and S10 as we felt this would give much better results due to the flexible scalability of these systems together with great ease of rigging, cutting down rig times. One great advantage with these systems is that they use the same HF drivers which are aligned when the S10 loudspeakers are flown beneath the E15’s giving a seamless transition between systems. We had great comments about the system and in particular about how well the E119 subs performed which blew everyone away.”