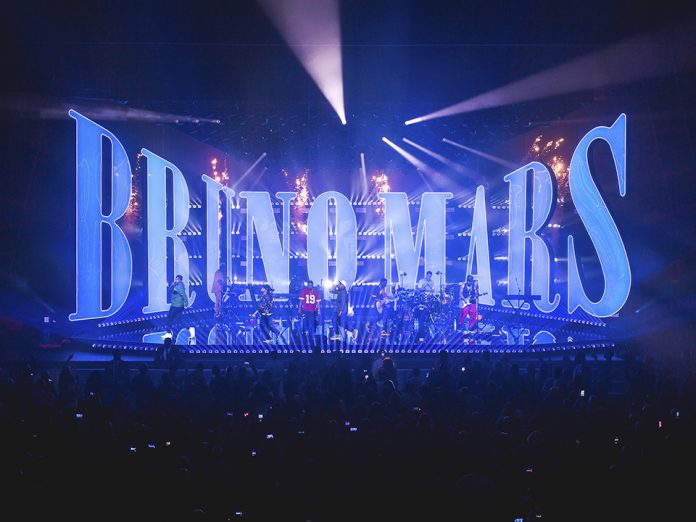 Bruno Mars kicked off his two-year residency at MGM’s Park Theatre at Monte Carlo with New Year’s Eve shows for holidaymakers, December the 30th and 31st. The shows marked the opening season of the new Park Theatre, which became one of the first venues in North America to use Claypaky’s SharBar advanced moving LED bar fixtures.

LD and programmer Cory FitzGerald deployed 87 SharBars provided by VER. “We lined the stage platform with them to create a base around the performance area. We also hung them from truss rigged together and flown as a wall of four rows across the back behind the ‘Bruno Mars’ sign,” he explained.

A.C.T Lighting, Inc. is the exclusive distributor of Claypaky fixtures in North America. The SharBar is a compact, durable moving LED bar with features that transform it into a brand new multi-beam effects light. It boasts six brand new powerful OSRAM Ostar RGBW LEDs with a power rating of 30W but takes up the same amount of space as an old 10W LED.

Thanks to its extraordinary lenses, the SharBar is able to produce six very narrow, dense light beams shooting parallel rays of light into the air. No comparable LED bar can produce a similar effect. The optical unit coupled to each LED consists of a motorised system with double mirror. With this ingenious, original optical unit the LED bar produces an effect similar to six separate lights, which can work synchronously or asynchronously with respect to each other.

FitzGerald reported that the SharBars were speedy and “gave a whole new level of control and flexibility to the moving strip light idea.”

Two full-size grandMA2s and one grandMA2 light served as the lighting consoles for the New Year’s Eve shows. The brand, distributed exclusively in North America by A.C.T Lighting, is a long-time favorite of FitzGerald’s. “The grandMA2 seems to be the most well-rounded console whether in terms of efficiency, accuracy or control,” he says. “It can achieve anything I’ve ever tried to get it to do, so far.”

That includes programming the new SharBars. “Using the SharBars was a unique experience with the ability to focus each cell and have long continuous lines of moving effects,” he pointed out. “It took some time to figure out a great system to focus and control the fixtures, a system we could easily update and use in the show.” But once done, the console “worked perfectly.”