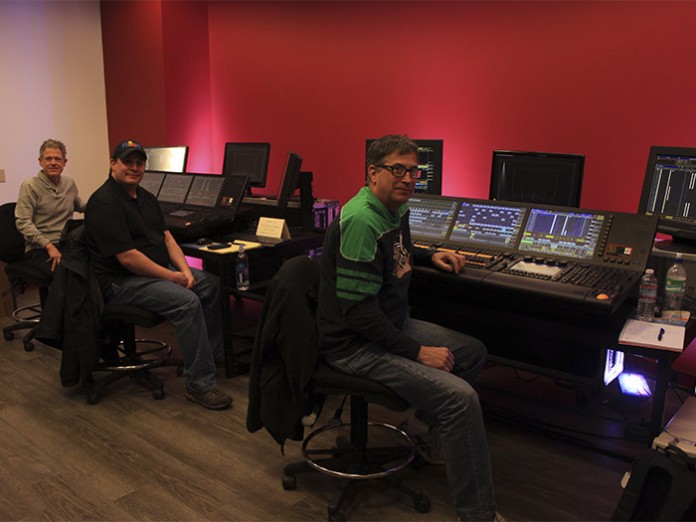 Before commencing the current leg of Bruce Springsteen and the E Street Band’s ‘The River Tour 2016‘, The Boss’s lighting team took advantage of A.C.T Lighting training classes to get them acquainted with their new grandMA2 full-size consoles.

Lighting Designer Jeff Ravitz and tour Lighting Director/main console operator Todd Ricci along with crew chief and second MA operator Brad Brown, the latter two from long term lighting contractor, Morpheus Lights, trained with Kat Covell at A.C.T Lighting’s offices in Burbank. The tour had long used grandMA consoles for lighting control; when it migrated to the grandMA2 platform recently the team decided that training sessions would help familiarise them with the new capabilities and functionalities of the desk.

“In the training classes we have a set curriculum of master topics, which we call MA’s Golden Rules, then we add topics applicable to the users and their particular situation,” said software trainer Kat Covell. “Our classes are very task-driven; everyone gets hands on the console. We start from the ground up making topics more complex as we go along. They’re really fun classes – it’s always interesting to see where users take them.”

She noted that the grandMA2 “is an evolution of the grandMA so there’s a lot more for users to learn, like presets and a new Editor. It was amazing to have Jeff attend for one of the two training days. We don’t often have the lighting designer participate so it was great to get his perspective.”

Jeff Ravitz, who has spent more than three decades touring with Springsteen, said: “Even though I haven’t done my own programming in quite awhile, it’s important that I understand more of the process. Over time I’ve gotten further away from modern programming techniques, but with the addition of a new console it made sense for me to learn what it can do. The grandMA2 is so user-friendly and powerful – there are a few things even I can do on it!”

Ravitz found A.C.T Lighting’s training sessions to be “very well presented and able to deal with somebody like me who’s not a programmer. Kat explained everything clearly and coherently. She took me from point zero and brought me to a level of understanding that would flow into more advanced training in the future to learn the more elaborate operations of the console. Plus, she sparked my curiosity and gave me what I needed to be a better communicator to my tour programmers.”

Two grandMA2 full-size consoles and one back up unit were deployed on the North American leg of ‘The River Tour’. “We’re used to Bruce changing up the show on a second’s notice, so we need to be able to grab anything anytime. We live cue by cue with Todd at the board,” said Ravitz.

“For this leg of the tour we have quite a bit of new material that’s never been played live before, so we’ve had to do some fresh programming on grandMA2.”

Ravitz noted that A.C.T Lighting’s training not only showed him “what’s quick and easy to do,” but also gave him “the confidence to ask for things I previously thought would be far too complicated, but I came to learn are built-in labor-saving features of grandMA2. I scribbled down a lot of notes and discovered many features to help the process of imagining creative cues.”