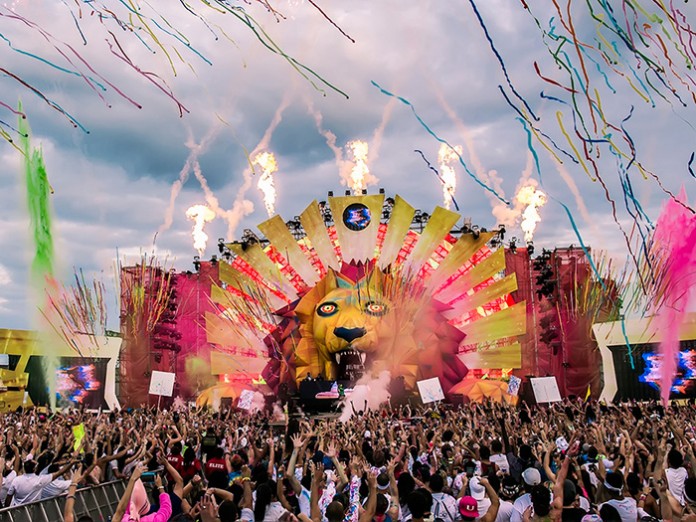 Jack U, Steve Aoki, Zeds Dead, Flosstradamus, Big Sean and other EDM heavies are headlining the current Life In Color Kingdom Tour, which is selling out venues in the US and UK.

As powerful as these artists are, however, none of them is the big cat on stage. That honour belongs to Panthera leo, better known as the lion.

A massive replica of the king of the jungle towers over the festival stage, capturing attention through its sheer 56ft wide by 43ft tall size, as well as its artful, intricate design. What really makes this beautiful beast stand out, however, are its bright, blinking, moving and soul-stirring eyes – eyes that are animated by Chauvet Professional video panels.

“The eyes make the lion come alive and touch everyone in the audience,” said Daniel Bouchard, Production Director of Life in Color, the popular festival, which this year is featuring the lion as part of its Kingdom theme. “We gave the lion a personality and a spirit, if you will, through the eyes. These are eyes that move and blink and change colours, so regardless of where you are, you feel their presence.”

Bouchard and Lighting Designer Collyns Stenzel gave the lion its lively eyes by using PVP X6IP LED video IP panels controlled by a VIP Media Server Pro and VIP Driver. The giant customised inflatable structure had pockets created to hold six PVP panels (three per eye). With 4,500 NITS brightness, the tiles are having no problem standing out, even during the festival’s sunlight hours or against the massive number of moving fixtures that are being used to illuminate the giant lion structure.

“We’ve never had to run the PVPs full blast, because they are so bright,” said Bouchard. “The panel display that the audience sees is always in the shape of an eye, because we masked the PVP’s edges to create this configuration. The intensity and the rich colours of these panels are serving us very well.”

As captivating as they are, the glowing eyes are not the only video panel component that is making the Life in Color lion come alive. Bouchard and Stenzel also used 270 MVP 18 tiles from Chauvet to add movement, colour and a magical glow to the lion replica’s mane.  The MVP 18 units are arranged in strips measuring two tiles wide by 12 to 16 panels high in between gaps in the lion’s tresses.

“The lion’s mane and the sunrays behind it were designed in oddly shaped patterns,” said Bouchard. “There are 16 open spaces in this mane arrangement. We fit the strips of video panels into these open spaces. We run colours and patterns along these strips from the bottom, which is the area closest to the lion, out to the edge of the mane. The movement of the patterns radiating out gives the lion a very animated look.”

Bouchard and Stenzel run only colours and patterns along the mane video strips. No IMAG images or artist logos are shown on the strips. These are displayed on the large video walls made with MVP Ta8 Curve tiles, which are also from Chauvet.

“Life in Color is a totally immersive sensory experience that goes beyond great EDM music,” said Bouchard. “This is rightfully called ‘the world’s largest paint party,’ so it’s an interactive experience. The lion is a big part of this experience on this year’s tour so we light it for its own sake, even though the patterns and colours displays on the video tiles will often reflect the music.  By coming alive through its eyes, the lion engages people and unleashes our imaginations.”