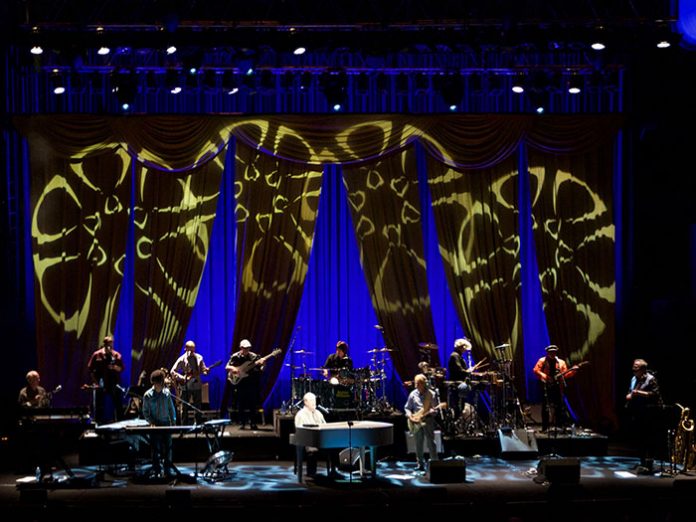 50 years ago, the legendary masterpiece Pet Sounds hit the airwaves, and in addition to re-releasing the album, Brian Wilson has embarked on a celebratory tour that features a lighting package provided by Bandit Lites.

With a set list that features the Rock and Roll Hall of Fame artist performing Pet Sounds in its entirety with band member Al Jardine and Blondie Chaplin (along with other selections from the illustrious careers of the Beach Boys and Wilson), the tour announced it will be continuing into 2017.

Lighting Designer Chris Stuba created a design reminiscent of a 1960s variety show, complete with a twelve piece band. The versatile, compact rig allows Stuba to keep even light levels for the dozen performers, while still applying looks that fit the mood of the music. To get the warm tungsten glow, Stuba used VL500d for wash lights, and Martin Viper Profiles for spots. “I love how wide they get, even at low trims,” Stuba stated.

VL 3500’s apply an even look as front and key lights, while MAC Auras, Chroma-Q Color Force 72’s and VL 3500’s light the gold and cherry coloured soft goods. A Grand MA 2 console provides control. “I do use a fair amount of audience lighting to bring the audience and the band closer to each other,” added Stuba.

He also was able to take advantage of Bandit’s Venue One programming space in Nashville, offering invaluable time to prepare and preview looks for the show prior to tour.

“First Class: that’s the only way to describe Brian Wilson, his tour and his entourage,” said Bandit’s Vice President Mike Golden. “Chris Stuba first introduced me to Production Manager Clint Boire and Tour Manager Marc St. Louis last year and I was immediately taken with the professional demeanour of the entire camp. I have known Chris Stuba for many years and he is truly the perfect fit for this show and artist.”

“It’s an old adage, but it is always all about the people, and these are some of the very best,” Stuba said of working with Bandit. “The show is prepped perfectly and labeled, and I always appreciate the availability of the use of the Nashville facilities to program and prepare. Everyone, including Vice President Mike Golden, Project Manager Jimmy Hatten, and Lighting Tech Jason Giaffo, always treats me warmly and professionally.”