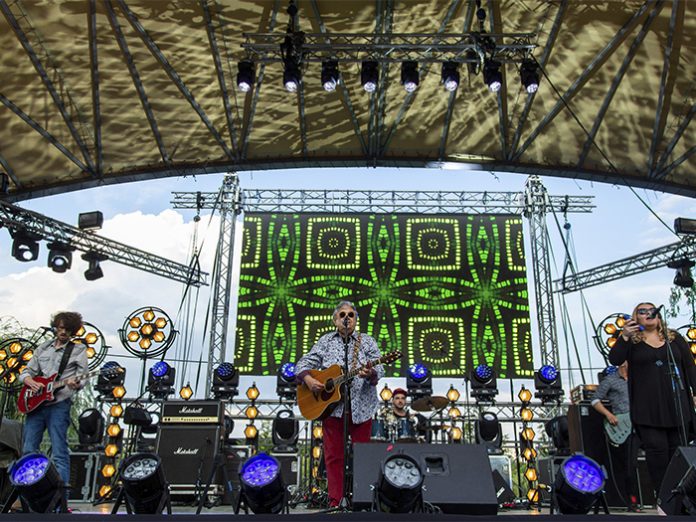 Great talent often defies easy categorisations, especially when it is driven by an equally-great drive to expand its reach and push boundaries to explore new ideas. Legendary Romanian polymath, Florian Pittis embodied this Renaissance-like vision in a four-decade career as a singer, actor, director, producer and internet radio pioneer.

Heralded as “the prophet of the blue-jeans generation,” Pittis was instrumental in introducing the electronic folk/rock sound to his country as a founding member of the iconic band Pasărea Colibri. Along the way, he also found time to star in seminal plays, translate Dylan songs into Romanian, start a radio station, and provide the voice for characters in animated Disney productions.

It was fitting then that Flowers For The Soul, an annual two-day celebration commemorating the life of Pittis (he died at 64 in 2007) should be a diverse, free-flowing event that reflects the broad scope of his genius.

Bogdan Gradisteanu of Marbo Trade, captured this spirt recently at the eighth edition of Flowers For The Soul, with vibrant, imaginative lighting that took flight in refreshingly original directions at Bucharest’s Titan Park. Busking was at the heart of his lightshows during the event, giving them their inspired, spontaneous feel.

Helping Gradisteanu busk his way through two days of music in his seven-universe shows was his ChamSys MagicQ MQ500M Stadium Console. “Busking was the key to making these shows come alive,” he said. “I busked a lot because the rhythm of the songs played during the festival was of such nature that you wanted to transition naturally and spontaneously between certain scenes of light. The MQ500M is a great friend when you want to busk!”

Describing how he relied on his console for busking, Gradisteanu had this to say about the MagicQ MQ500M Stadium: “The console’s crossfaders were great for busking, as they helped me make changes throughout the show quickly. Also, I must say that the motorized faders found on the MQ500M made page changes go incredibly smoothly over the two days.”

The intuitive layout of the MagicQ MQ500M and its two large touch display also helped Gradisteanu busk smoothly, as did the console’s Execute Window, which he called “my main operating table,” adding that “all of my beams, spots, and washes were carefully placed in order to have a seamless operation during the show.”

Gradisteanu and the event’s head of production Sica Gradisteanu, maintained a sky-high energy level throughout the two-day festivities. So too did the fans who gathered at the park, despite the often-nasty weather. “They stood the whole show, even when we started getting hit bad with wind and rain,” said Gradisteanu.

It was the kind of passion and energy that Florian Pittis would have understood very well.