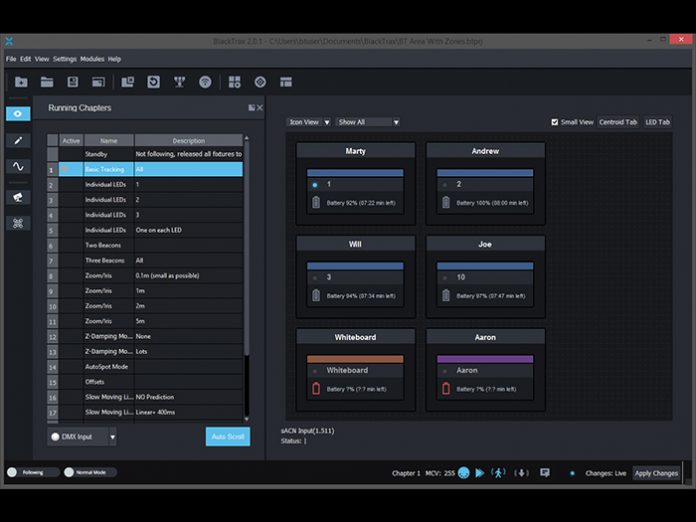 CAST has released version 2.0 of its realtime motion tracking system BlackTrax, after more than 18 months of beta testing.

Discussing the changes to the software, Marty Cochrane, BlackTrax Product Manager, explained: “A lot of these improvements were developed from customer suggestions, requests and general feedback. This includes better system reporting, real-time chapter programming and more control over fixtures during the calibration process.”

The new fixture calibration mode improvements on the BlackTrax solution ensure faster calibration. Multi-person calibration enables several people with different beacons to calibrate their own selection of lights. Colour and gobo on the fixtures will automatically be cleared and BlackTrax will have control over zoom/iris. This will allow the user to jump in and start calibrating right away, without needing to create a special BlackTrax calibration pre-set on the console, thus giving the console programmer time to continue their work.

Improvements have also been made to the fixture programming. BlackTrax now has unified multi-fixture settings and the ability to quickly view, select and apply settings to several fixtures from across multiple chapters. It also has new icon and table views for fixtures and trackables to display fixture setting information much faster than ever before. Additionally BlackTrax 2.0 offers rigid and soft frames for more flexible tracking operations and better object tracking.

“Over the course of the beta we received a lot of feedback from customers which we used to significantly improve and refine frames. Improvements include being able to easily replace BlackTrax beacons in frames, add or remove several beacons and LEDs from frames, clone frames, and apply offsets in real-time,” said Cochrane.

He added: “BlackTrax version one was all about functionality, getting the system to do some cool and amazing things. Now that we have reached the milestone of the world’s most stable and functioning tracking product and it has been working flawlessly in the world’s most demanding projects, we wanted to turn our attention to ease of use, simplicity, and unification.”