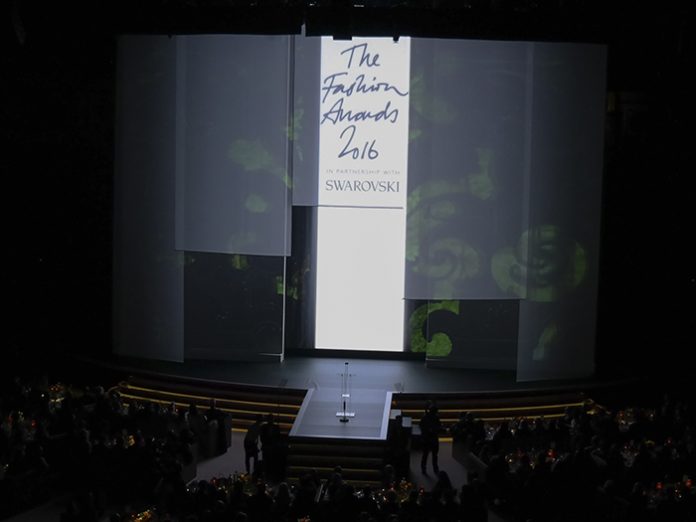 Blackout supplied and installed a complex series of projection screens and drapes to transform the Royal Albert Hall ahead of The Fashion Awards on 5th December 2016 for the third year running.

Project Manager Tom Lambert, who has worked on the event for the previous two years at London’s Coliseum, oversaw the installation of the production rigging at the Royal Albert Hall utilising Liftket motors and associated rigging equipment to fly two large projection screens, an LED screen and Blackout’s five roller screens.

Black wool serge drapes were installed around the Albert Hall’s choir stalls to enhance the TV aesthetics of the show and to mask any lighting detracting from the on-stage entertainment. Blackout’s Pipe and Drape system was utilised for the quick installation of draping around the backstage area, helping to enclose parts of the venue.

Jim Lambert, Inca Technical Director commented: “The Royal Albert Hall is always a challenging venue and this project in particular was going to require close co-operation between all suppliers in order to achieve a very tight load in schedule of 14 hours. Carpet, VIP tables and benches also had to be loaded in at the same time as rigging which further complicated the schedule.”

Blackout had a week of rehearsals at LH2 Studios in Park Royal to plan video programming and pre-build screens to iron out any potential problems.