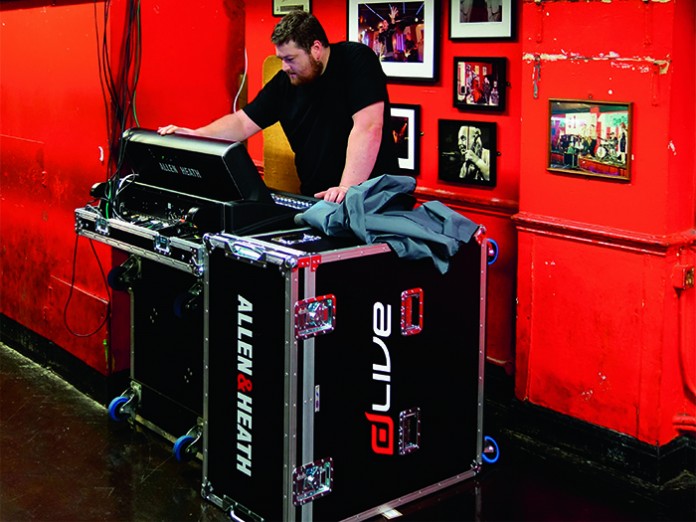 The original members of punk rock band, The Professionals, made up of ex-members of the Sex Pistols, reformed for an unsurprisingly sold out gig at London’s 100 club. For the first time in over 30 years, Paul Cook, Ray Mcveigh and Paul Myers appeared along with Tom Spencer in an intimate gig to coincide with the release of the complete professionals triple CD set, released by Universal. Sound Engineer Ben Hammond was tasked with managing the audio, selecting Allen & Heath’s new dlive mixing system. He shares his experience of this very special gig.

What duties did you have to handle with the dLive?

The 100 is a small club, with monitors managed from FOH and the requirement was to provide a stereo and a multitrack record too. In a world of clean, clean, clean, I needed to deliver an edgy driven mix that was associated with this type of music, and when at least 50% of what you’re hearing is coming from the stage and not me, being able to put a mix together where I incorporate the stage noise and then add to it, while retaining the edge I needed was an interesting task.

The dLive is an extremely clean sounding console, and the move to 96kHz processing gives so much more space and headroom. The width within the master bus is huge. However, it still dirties up nicely, so a combination of the two enabled me to get the sound I was looking for pretty quickly.

What was the workflow like for a chaotic sold out pub gig in London?

Because space was tight and channel count relatively low, I opted for the smallest hardware from the dLive range – an S3000 surface and DM32 stage rack – fitted with a Dante networking card. The gig was a relatively simple affair with drums, bass, two guitars, and four vocals, four wedge mixes, and stereo and multitrack recording via Dante to Reaper, to be mixed later for a ‘live’ release.

What particular FX have you been using in dLive?

I tried to keep the mix as open and raw as I could, just utilising the desk’s brilliant built-in FX, which means I don’t need to rely on plug-ins or outboard. I used the SMR reverbs (mostly rooms) and some short slap delays. I also used a little bit of ADT on the guitars to add that old chorused shimmer, some dynamic EQ over the vocal group to keep the four vocals in check for FOH but leave them open on the channel so I had maximum level to send to the wedges – which were on fire!

How did you adapt your style of mixing to this gig?

As usual, I used a lot of sub groups, this came from learning to mix in a tiny venue with very underpowered monitoring, so I was back at home here! The idea is that any compression or heavy EQ cuts are done on groups so you retain the maximum level available for the monitors. I have always mixed like this as I much prefer treating multi mic’ed sources as one instrument, and I’m a big fan of graphic EQs across most things. dLive handles this well with the number of processing mix channels available, as well as additional FX sends, monitor sends, matrix outs etc.

Did you build a showfile on the fly?

Yes, building a basic template showfile and then putting things together as I moved on was super easy and very quick, proving just how intuitive the dLive surface is.

What was the reaction from the band and punters?

The gig ended on a great note, the audience were ecstatic, the band very happy, and looking forward to their next outing. It was a real honour to work with someone with as much history and impact in music as Paul Cook.