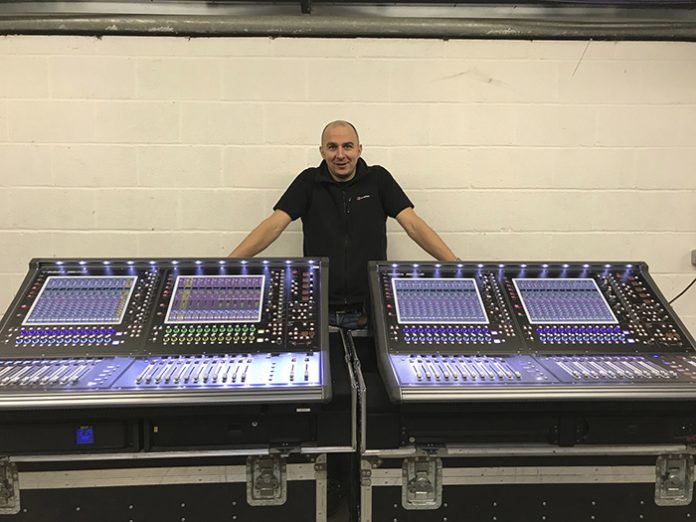 “When the SD12 was launched, I could immediately see it being a very popular console because it’s such a great fit for both small and large jobs,” Shepherd explained. “The footprint of the console means it will fit into a bus or trailer, whilst its twin screens give it the feel of the larger consoles in the range, which helps Front of House engineers with speed of workflow. That’s why we bought 2 of them and they’ve been working hard all summer on the tours, as well as for the both artists’ appearances during the busy festival season.”

“I was using an SD10 before going onto the SD12,” said Davy Ogilvy, FOH for Tom Odell. “It took a little while to adjust to the SD12, but it’s a great desk. The smaller footprint made it easy to squeeze into crowded FOH tents during the festival season and the built-in UB MADI and DMI-Dante card have been endlessly useful.”

“It’s really affordable for smaller shows,” added Shepherd, “and adding optics means it can be used in a much more flexible way with our existing consoles – we already have a large stock of DiGiCos including SD10s, SD8s and SD11s – whilst using SD Racks gives the SD12s more flexibility with the rest of our stock.”

David was delighted that his confidence in the SD12 and in DiGiCo’s reputation for building long-lasting, tour worthy consoles has paid off. “I bought the consoles before anyone had even spec’d them because I just knew they were going to work really hard – and they have!” he concluded. “Not only have they been out all summer with James Arthur and Tom Odell, one of them has already been booked for the whole of November by British musician, producer and DJ, Bonobo.”