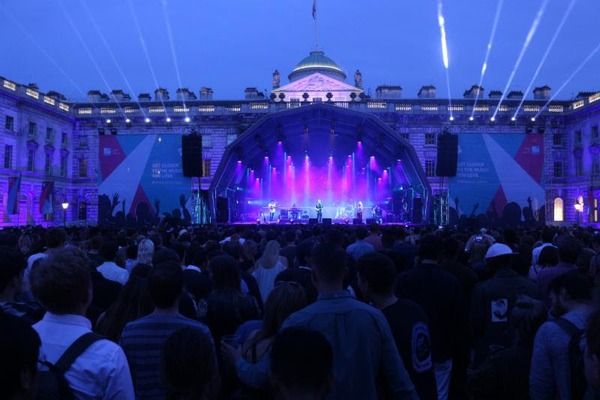 An Avolites Arena lighting console was used to program and operate the striking lighting design for producer and singer-songwriter Tom Misch during his outdoor headline show at the Summer Series festival held at Somerset House, London.

Misch’s lighting designer John ‘JP’ Partridge has worked with the British-born artist since July 2017, and the Somerset House show marked the design’s first live showcase. During Misch’s current tour, JP has created for the artist a pared-back design, aiming for a ‘strong and purposeful’ aesthetic.

“The lighting design for Tom is centred around a single, bold focal point on stage, with the rest of the lighting blending into the background. A row of 10 GLP X4 Bar 20s, raised behind Tom, accent the show with a striking horizontal line of light that emanates from behind the band. This gives a bold impact and centre point to the overall design,” JP explained.

Fellow Lighting Designer Tom Campbell assisted JP in programming and operating an adapted version of the design for the Somerset House set. The designers utilised an Avolites Arena console, 1 of the 2 house consoles provided by the venue to visiting lighting designers. “John had a really clear idea of the look he wanted for the show. The X4s provided us with a near-solid wall of light that we could run effects and colours across using the control features of the Arena console,” Campbell commented.

The Arena was loaded with Avolites’ control software, Titan v10.1, complete with features such as BPM Sync, Scene Master and updates to the pioneering control feature, Keyframe Shapes. “During the programming stage I relied heavily on v10.1’s Keyframe Shapes and Palettes,” continues Campbell. “I could change the intensity, colour and zoom effects of the stage’s lighting fixtures using the console’s two touch screens. This allowed for a faster, more intuitive workflow between John and myself.”

The Keyframe Shapes feature offers tools such as transition curves, phases and spatial direction to build a visual, interactive control platform to aid lighting designers with programming. Campbell added: “During the show we also brought in some on-the-fly control. The Arena has a large number of faders. We pre-programmed these with some mole/blinder chases and fixture stabs. The faders are amazing for using as back-up on top of pre-programmed cue stacks.”

“One of the first consoles I used was an Avolites Azure with Graphics tablet,” concluded JP. “Avolites have so many years’ experience in rock and roll, I know that any of their consoles is going to get the job done.”