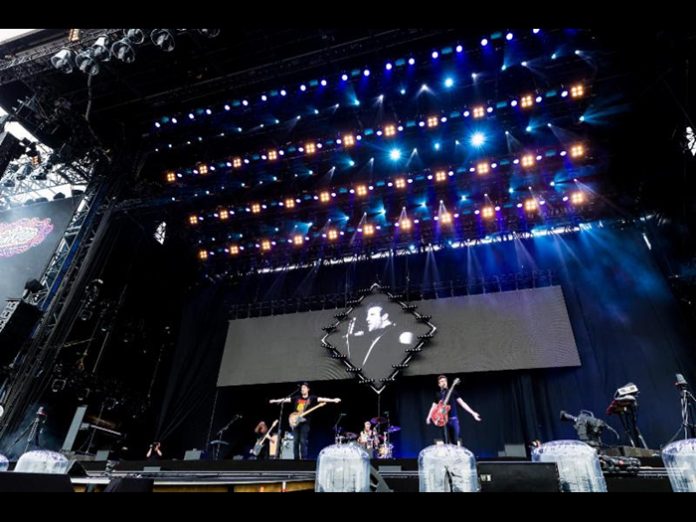 “I have been using Avolites for over a decade,” said Kuipers. “The Arena desk is great for large set-ups like Pinkpop, because it has a lot of on-board connection options such as fibre and SMPTE Timecode.”

Kensington’s Pinkpop set came in the middle of the band’s 2017 summer festival tour. For the show, Kuipers designed a high-impact floor package consisting of a range of moving lights and custom-made risers, complete with diamond-shaped LED screens.

Touring the show through the Netherlands, Hungary, Germany and Switzerland meant that Kuipers is reliant on local suppliers to meet fixture specifications. As it is not always possible to match specification to local supply, occasionally other fixtures need to be swapped in.

“One of my favourite features of the Avolites Titan software is the ‘Fixture Exchange’ feature,” said Kuipers. Fixture Exchange allows the LD to swap out a fixture whilst keeping its existing data including any group, palette and playback information, to transfer to a new fixture. This significantly reduces the need for manual updating, cutting down on Kuipers’ programming time.

“For Kensington’s festival shows, I have created a single show file. I then use a combination of cue lists, timecode and live control on set for each show,” said Kuipers. “Avolites provides me with the tools I need for a quick and easy workflow.”

Kuipers identifies Titan’s ‘Set Halo Legend’ feature, which allows the designer to add coloured borders around fixtures and groups and Freeform Workspaces, as key to his set-up. The feature ensures that groups and palettes are easily identifiable and workspaces are editable and dynamic.

“With the Arena desk I use the two on-board touch screens, splitting one screen for my timecode and the other for my cues and palettes,” said Kuipers.

To accommodate the Pinkpop house rig and Kensington’s incoming floor package, Kuipers needed to expand beyond the Arena’s existing 16 universes to 26 for the house rig and 2 universes for the band’s floor package. The designer networked in the two TNPs and an Optical TNS to connect FOH to stage.

“With Fixture Exchange, Exchange Mapping and the Mapper it is fairly easy to run a complex show on any Titan desk on a different rig almost daily,” said Menno Appelhof, Console Account Manager at Fairlight. “Avolites users are also helped by the fact that the user interface remains the same across all Avolites Titan desks.”