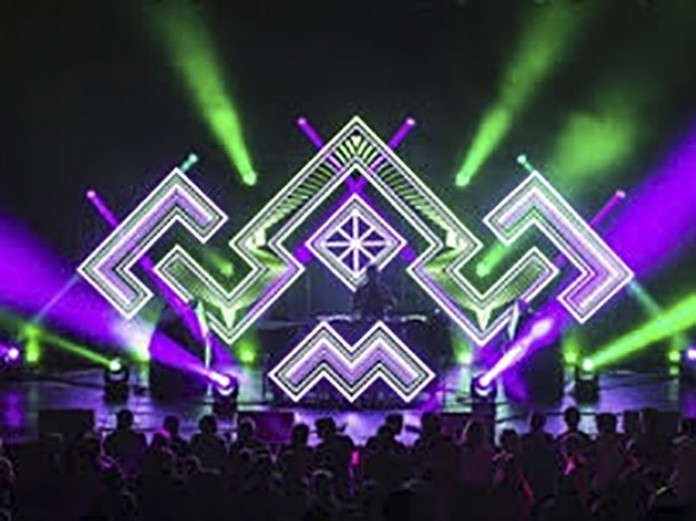 In the 1970s, the Skyway 6 was one of the biggest downtown multi-cineplexes in the US. Twenty years later, its glory days as a movie theatre gone, it stood worn and neglected, before being reborn as the Skyway Theatre, one of the hottest electronic music venues anywhere. Virtually every major EDM artist has performed at this spacious 2,000-seat Minneapolis icon, but the same cavernous qualities that make this a magical place to take in a concert can also create special challenges for a designer wanting to create big looks on stage.

Being from Minneapolis and having designed for the Skyway Theatre before, lighting designer Ryan Warffuel and VJ/content creator Max Koehler of Antic Studios were familiar with this challenge. They were therefore ready to “fill space” when they created a rig for the red-hot Canadian duo Adventure Club at Skyway, using a collection of Chauvet Professional video panels and moving fixtures supplied by Monkey Wrench Productions.

Warffuel and Koehler and the rest of the Antic Studios team (Derrick Koehler, Brandon Rathke, and JD Vanderwiel) not only filled the space of this majestic venue, they used it to create a brilliant video and light medley using 41 PVP S5 LED video panels, 12 Rogue R1 Beam fixtures and four Q-Wash 260-LED washes.

At the heart of their design was a mesmerising triangular-shaped video wall structure divided into five irregular pieces that flanked the DJ booth and traversed roughly half the stage. “We used to do mainly projection mapping before we went to LED panels, so we were used to creating very modular 3D shapes the way we did for Adventure Club,” said Warffuel.

“Another reason why we like to break up the panels into modular shapes is that it covers as much space as possible with a limited amount of LED panels.  In this design, we decided to angle the panels at 45 degrees.  This not only gave us a bunch of new interesting options, it also allowed us to create a large structure out of only 41 panels, which was important given the size of the Skyway Theatre.”

Adding to the visual impact of the intriguing video wall configuration were the dramatic breakout patterns displayed on the panels. “We use Resolume Arena as our VJ and mapping software,” said Koehler. “We have also developed mapping techniques using other third party software like Adobe Illustrator and Adobe After Effects.  As far as the images we displayed are concerned — we created custom content/graphics just for this stage design.  Since switching from projection video to LED panels, we’ve been able to design stages on the computer ahead of time and create graphics that will fit the stage perfectly.  We do this by knowing the exact resolution of the panels and how we are going to map them, which is how it went with Adventure Club.”

Supporting the video display were aerial effects from the Rogue and Q-Wash fixtures. The Antic Studios team positioned six of the Rogue R1 Beams on top of the vertical truss supporting the video structure. The other six Rogues in the rig were arranged on the stage deck to create crossing patterns with the flown fixtures.  All four of the Q-Wash fixtures were flown on piping run from the vertical truss and used to fill space not covered by the crossing beams.

“We like to have a good mix of lights in the air as well as on the ground, so we try to apply that to every stage we do, because we think this gives us the best results for programming and movement,” said Warffuel. “Also for Adventure Club in this venue we tried to fill in as much negative space as possible to create a full look.  Having a mix of lights at different heights is important. It gives us the ability to create really unique and different positions and movements.”

Warffuel singled out the brightness of the Rogue R1 Beams for special praise. “The Skyway is a pretty large venue, so having bright enough lights is always the first concern,” he said. “The R1 Beams look really good in that large space and show up well.  We also really liked the look of the tight beam angles these fixtures make.  They look great when creating crossing patterns and setting positions.  Also, the gobos, the prism effect, and the multi-facet prism effects are a fun surprise to save for later in the show.  The prism effects are also great when trying to take up more space in a large venue like Skyway Theatre.”

Taking up more space? As virtually everyone at the Adventure Club concert would agree, the Antic Studios team did much more than that with their video and moving fixture design; they actually transformed space into something that was pretty incredible to see.