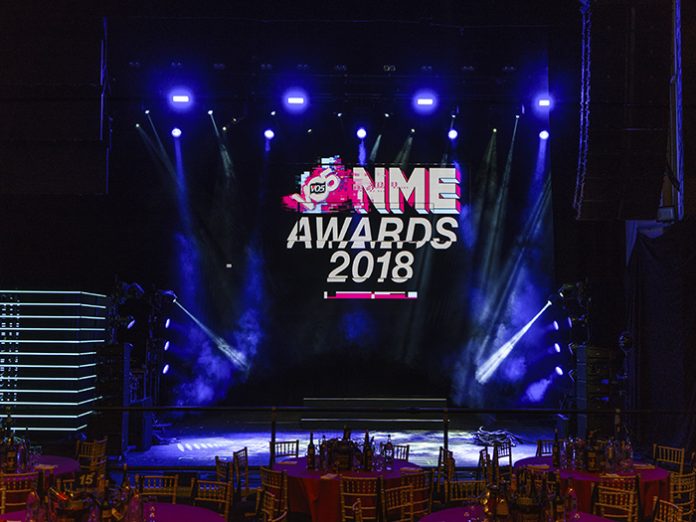 Central to the event design, created by event production company Reality Ltd, was a backdrop consisting of multiple LED screens that changed configuration for each artist and award.

To support 2018’s visual theme of ‘The Glitch‘, which featured broken up graphics and images, Anna Valley provided 3 on-stage video elements; the exploding banner, comprising 3 LED screens in staggered positions to display captions, logos and titles; the exploding main screen, created from 5 LED screens that moved independently into different configurations to form the backdrop for the main acts; and the MiStrip Lattice Gateway, interlaced video poles used to create a gateway for artists and presenters to make their entrance.

Both the exploding banner and main screens were built from Anna Valley’s AV3 3.9mm LED panels and were suspended and moved by Neg Earth using Kinesys motors. The LED content was managed using a Barco E2 4K switcher, with graphics and video playback coming from Apple MacBook Pros.

“The dynamic LED design was borne out of a desire to bring excitement and surprise to this high-profile event,” explained Reality Ltd co-owner, Paul Corrick. “Achieving the movement we wanted necessitated the building of a test rig which was pre-rigged for 2 days before anyone else came to site for the rest of the build. It was the most challenging aspect of the event, but well worth it thanks to the combined efforts of Anna Valley and the Neg Earth teams!”

In addition to the on-stage video presentation, Anna Valley also provided IMAG screens using a Panasonic AV-HS 410 vision mixer and 2 Panasonic 21K projectors. Camera images and autocue feeds for the presenters and performers were played back on 7 LG 75-inch 4K screens, positioned throughout the venue.

“It’s always exciting to work on events that push the boundaries of what can be achieved with technology,” concluded Anna Valley Director, Nick Hart. “We’re looking forward to tackling more projects like the VO5 NME Awards 2018, especially now that we have acquired Matrix UK Solutions and have the additional capacity and touring experience of their team at our disposal.”