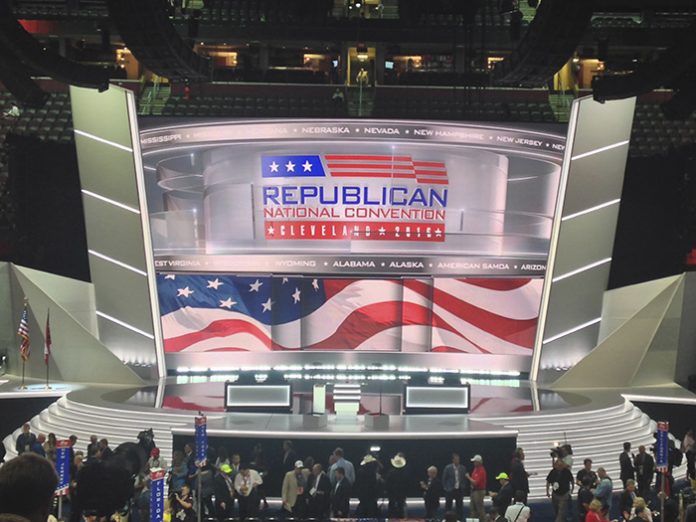 Powersoft supplied amplification for the national conventions of America’s two largest political parties, as the presidential candidates for the Republican and Democratic parties were announced.

A little more than a week later, and across the country in Philadelphia, Hillary Clinton accepted the Democratic party’s nomination to run for President and again Powersoft was on hand to amplify proceedings in front of 4,700 delegates, who cast their ballots at the Democratic National Convention. This time 104 K10’s were deployed.

With 2,472 delegates in attendance at the 2016 Republican National Convention, ATK Audiotek, which has been handling convention audio for more than two decades, used the equipment provided by Powersoft.

Pat Baltzell, Sound Designer and FOH engineer for ATK Audiotek, was responsible for the audio system for the event at the Quicken Loans Arena in Cleveland, and began the design process last December: “First and foremost, this was a speech-based event, so the design approach had to take into account that every single seat needed to clearly hear what was being communicated,” he says. “Further, the venue is being used to maximum capacity, and there was a seated floor where the basketball court normally is.”

To ensure reliable audio and maximum intelligibility, ATK chose to integrate the 84 Powersoft K10 amplifiers, which were used to power all primary speaker clusters, in this case JBL Professional by Harman VT4889’s. The clusters in the primary system surrounded the stage, and ATK also placed 14 delay clusters in the 200 level upper deck seating area.

The Powersoft K10 amplifiers were hoisted onto the catwalk of the arena, high above the audience. “The amp racks were motored up there one at a time, and this was great because they are all so light,” Baltzell explained. Having the amplifiers on the catwalk enabled ATK to reduce cabling lengths to the clusters, and each of the amps was controlled remotely using Powersoft’s Armonía Pro Audio Suite software.

“The Powersoft amplifier racks required a small footprint on the catwalk, which was very advantageous because this was also used for lighting dimmer racks, balloon drops, confetti and other things,” he continued. “There was a lot of activity up there that you would not normally have for something like a rock concert or a basketball game.”

Before the amplifiers were sent up and placed into position, they were pre-programmed to cover the appropriate zones and wired for AES connectivity using CAT5 cabling. Once in place, Baltzell and his crew were able to maintain control over the units via Powersoft’s Armonía software.

In a follow-up to this event, at the Wells Fargo Center in downtown Philadelphia, 104 Powersoft K10 amplifiers ensured that more than 180 speeches and 15 performances at the Democratic National Convention were heard by delegates.

Pat Baltzell’s design specification called for two amplifier barges located on either side of the main arena scoreboard, which were to drive the primary speaker clusters. “One of the biggest considerations we faced was placement of equipment,” explained Powell. “For the amp barges, we were limited in the amount of weight we could put up there, and we had to ensure we could get sufficient power in there to drive the amps. All of these things factor into how Powersoft can really help us at a convention like this, since the racks are so light and power-efficient.”

For the primary audio system, ATK specified six clusters of JBL Professional by Harman VT4889 loudspeaker arrays located around the stage and 12 time-delayed clusters for the arena’s upper deck. ATK’s Alex Guessard configured and time aligned the system using Powersoft’s Armonía Pro Audio Suite software, creating multi-zones for both the primary and secondary loudspeaker clusters on each level of the arena.

“We had to create different delays based on the overall oval shape of the room,” said Powell. “The overall coverage was great and it performed exactly as we expected.”