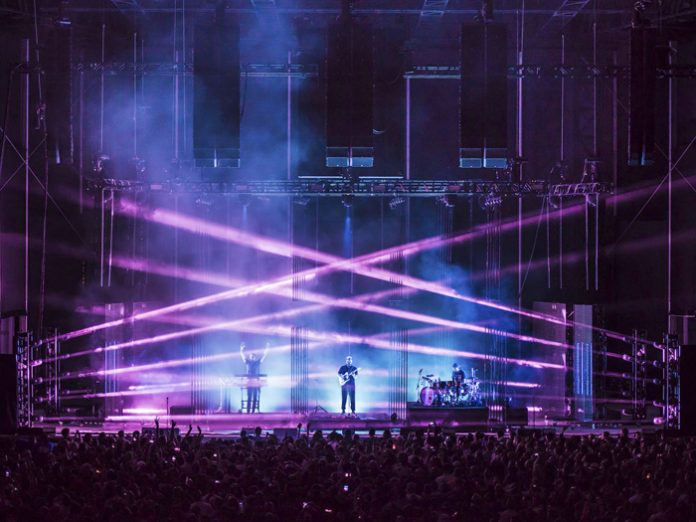 alt-J keyboardist Gus Unger-Hamilton told UK music publication NME ahead of the show. “Wherever you’re standing in the audience, you’ll be able to hear the music coming from all around you,” he enthused.

Lance Reynolds alt-J’s Chicago-based FOH Engineer has been using L-Acoustics sound reinforcement systems with the band since 2015. He notes that the band’s manager, Stephen Taverner, had been searching for the right technology to present a show in surround for quite a while, so Reynolds visited L-Acoustics’ US headquarters in California’s Westlake Village to personally explore L-ISA as a potential option.

“Once I got my hands on it, I was very excited—and immediately started thinking about what we could do with it,” he said. Taverner and the band shared Reynolds’ enthusiasm about creating what would ultimately become one of the coolest live shows in decades.

“In preparing the mixes for this show, I’m lucky that alt-J has a lot of interesting sonic nuggets and a little bit of sound effects,” said Reynolds. “These elements exist in our normal live show, but with L-ISA, it’s much more evident. There are a lot of things that I’ve been able to just draw out—pinpointing instruments and sounds in specific places. That’s really what this ‘360’ mix is; it’s an extension of what we already do, but a really big extension.

Tom Worley (KSE) of Rat Sound Systems created a mounting system for the 16 L-Acoustics Syva surround speakers, attaching poles behind the handrails at the upper edge of the seating bowl and fixed the speakers to them. Frequently used for permanent installations and corporate or private event applications, versatile Syva was also the perfect fit for Forest Hills, said Worley.

“They’re loud, lightweight, and have the right dispersion. And even without using a sub with them they go low enough that it made sense.” L-ISA Controller software was used to place sound objects with the L-ISA Processor dedicated to spatial audio processing, and the entire system was powered by a combination of 15 L-Acoustics LA12X and 31 L-Acoustics LA8 amplified controllers.

The MADI transport capabilities of Reynolds’ console of choice, the Avid S6L, supported 32 outputs to L-Acoustics L-ISA, which can accept up to 96. “You could send to individual channels, one to one, but I did it with stems,” he reported, noting that it was easier to bus together both kick drum mics to a single channel, for example. “Plus, I needed some extra channels to do some submixing and some things to get sources into the surrounds that made sense,” he adds.

L-Acoustics L-ISA mixing integrated seamlessly into Reynolds’ workflow at Forest Hills. “The desk was simply feeding mixes to L-ISA and I was doing any movements via snapshot automation in the L-ISA controller,” he says, driven by the timecode running the show automation that controls the lighting and other production elements.

Surround effects throughout the show—including a helicopter fly-by, haunting wolf howls, and a children’s choir during the song “Pleader” that enveloped the audience—generated chills and cheers from the crowd. Reynolds was concerned that a steady, syncopated heartbeat that starts “Hunger of the Pine,” almost like a click track, might not work as well.

“We figured out that it was not too obtrusive to do it manually for the first eight bars before anything else happens in the song,” he says, adding that California-based L-ISA Labs Engineer Carlos Mosquera dynamically panned the heartbeat around the venue. “Using a controller on an iPad, Carlos flew the sound around very specifically with the touch of his finger, which was really fun.”

Read Kel Murray’s exclusive report on the show below.