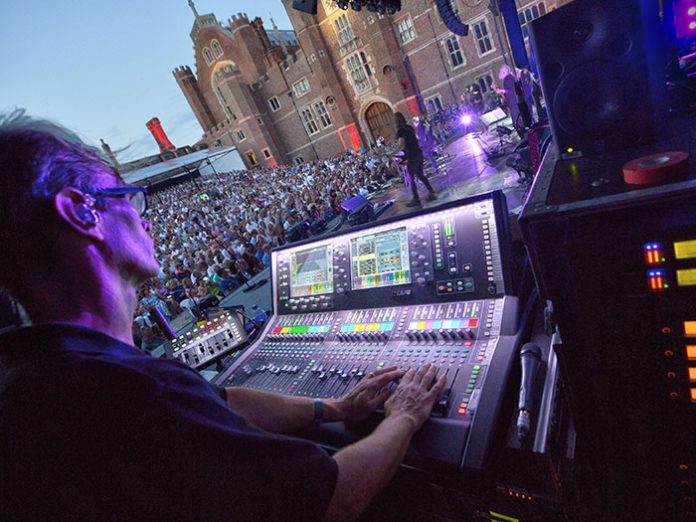 Bryan Ferry is on tour across the USA and Europe, including various dates on the festival circuit, carrying a dLive S Class mixing system from Allen & Heath to manage monitors.

Supplied by Britannia Row Productions in Europe and Clair Bros in the USA, dLive was selected by Monitor Engineer, Tom Howat. The system comprises a S5000 Surface with DM64 MixRack, DX32 Expander Rack, and two IP8 controllers for remote access. Howat has used dLive on previous tours, including Paolo Nutini and Morrissey.

“Once again, the dLive delivers clarity and precision. Mixing in-ear monitors for a 10-piece band comprising some very well-known and experienced musicians requires a monitor desk that will deliver a detailed, full sound. DLive’s built-in compression and FX make a huge contribution towards achieving this, along with plenty of scenes – 50+ and counting.” explained Tom Howat.

DLive’s recent firmware updates, v1.4 and now v1.5, have provided new features that have freed up Howat’s time and enabled him to focus on Bryan’s mix during the shows. He is using the new Dyn8 units, new FX units, tube pre-amp modelling features on all four saxophones, and the extended choice of compression – 16T on most instruments and Peak Limiter 76 on all vocals.

“I’m loving the new features, particularly the Dimension Chorus on acoustic guitars. The enhanced level of recall filtering in v1.5 is a major step forward in the flexibility of the scene automation,” continued Howat. “Bryan’s monitor mix requires constant, active mixing throughout each song at a very detailed level. Bryan has an outstanding ear for the songs’ musical arrangements, and dLive is really helping me deliver this.”

“I have once again deployed the excellent IP8 controllers, one hooked up to the monitor desk which enables me to make known and calibrated changes to other musicians’ mixes whilst staying on Bryan’s mix on the main surface. The second IP8 is deployed as a backup for the FOH system, featuring most of the input channels mapped over the six fader banks contributing to a pre-fade stereo mix,” concluded Howat.