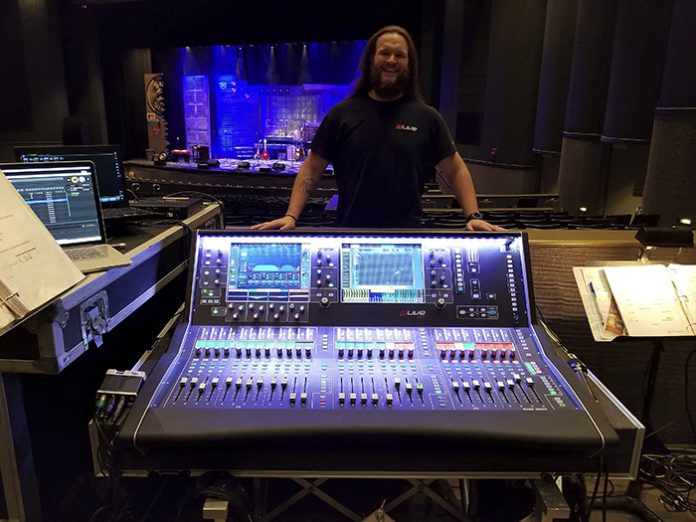 Chris Wilson mixes both FOH and monitors on the tour. “I’ve mixed theatre and I’ve mixed rock-and-roll. But, this show is different because it goes from theatrical dialog to full rock-and-roll. So, I have to marry the 2 for the audience while I manage monitors for the cast.”

Wilson requested the dLive for this tour from equipment provider Epicenter Productions of Bedford, Texas. “I ran 3 big metal stages with dLives at the 2017 NAMM,” he explained. “They outperformed anything I had ever used and changed my mind about what digital can accomplish.”

To manage both tasks for the Million Dollar Quartet, Wilson splits each input channel to the dLive’s Layer F for FOH and Layer A for monitors. On both layers, he keeps DCAs on the right-hand fader bank as his master show control. He uses dLive effects to help maintain the show’s 1950’s atmosphere.

“I’m running a nice hall reverb on all of the Super 55 mics and a tap delay on Elvis and Johnny Cash to give them that nice, thick 55 ‘echo/slap’ feel on Ghost Riders and 16 Tons,” he continued. “I’ve implemented the automatic mic mixer on my dialog over-ear mics to keep them from comb filtering and cancelling. That really cleaned up the intelligibility. And I’m using the on-board compressors for each channel. The ability to put dynamic EQ and multiband compression on so many channels is mind-boggling!”

The tour uses wedge monitors exclusively. “We don’t use in-ears because the producers are very serious about being 1950’s period correct,” said Wilson. “But, we’re going from 800-seat to 4000-seat rooms so the stage set changes dramatically from day to day.” To speed the setup, he adjusts monitors while walking the stage using the dLive’s Virtual Sound Check and the dLive Director software on his laptop. “With Virtual Sound Check, I know that I can get their mixes pretty much on point before they ever hit the stage,” he says. “And I’m hearing ‘This is absolutely a perfect mix!’ from the guys.”

Wilson concluded: “The dLive’s sound quality is dramatic. And, I love the built-in compression. Even when you push it hard, there’s none of that digital hash. And, I can do parallel compression on my Super 55s without using another channel and with no phase shift. There’s not another desk on the planet that can do that!”