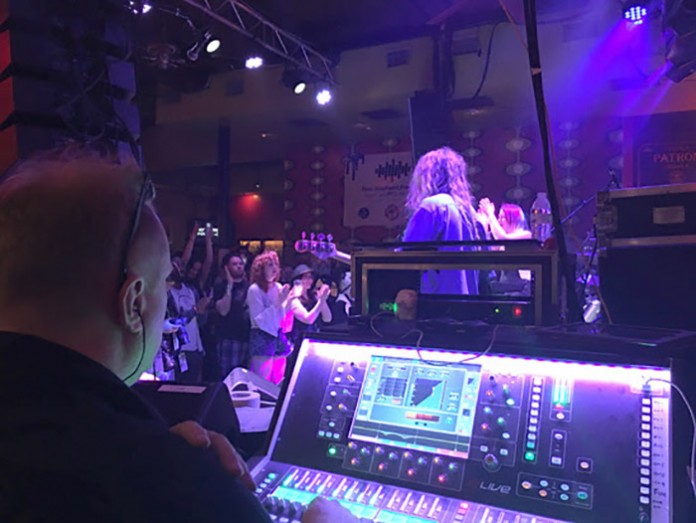 Celebrating 30 years in 2016, the “South by Southwest Music and Media Conference” (SXSW) is a six-day event held every March in Austin, Texas. Allen & Heath’s digital mixers from across its dLive, GLD and Qu ranges were employed this year in many of the participating venues.

Two dLive systems managed the popular British Music Embassy Showcase, hosted by Austin’s “Latitude 30” club and featuring 10 to 12 bands each day of the festival. A GLD-80 was installed at the Threadgills venue to manage their roster, plus local PA company, Rock ‘n Roll Rentals, supplied Qu mixers to various smaller venues. dLive was requested for broadcast duties at the SPIN magazine party at Stubbs, where Chvrches, Deftones, and Vince Staples played, and a GLD-80 Chrome system with Waves was used by Tommy Williams mixing Ry-X for his key performance at St David’s Episcopal Church.

At the British Music Embassy, dLive managed rapid and smooth transitions from one band to the next with short learning curves for each band’s FOH engineer and a great musical experience for their audiences.

The audio system design team faced three challenges. First was the festival itself, which would bring a new band every 35 minutes during the afternoon showcase and again at night. Each band wanted a quick setup to maximise their play time and many brought their own FOH engineer who would need crash-course training on dLive. Second, the mix position and stage were separated by a standing audience making it difficult to do monitor mixing from the FOH position and limiting the routes for temporary cabling. Finally, the designers wanted digital networking in part for a multi-track recording feed for the BBC who planned to broadcast much of the British Music Embassy programming over BBC Radio in the UK.

To meet these challenges, the team designed a fully digital system with a dLive S5000 mixer for FOH and a dLive S3000 for monitors. They added a DM64 AudioRack on the stage for the monitors with a digital split to a DM32 for FOH. A Pakedge Ethernet switch routed Dante networking from the FOH dLive to two BBC computers for recording and to the line array processor. A pair of CAT6 cables (one redundant) above the Latitude 30’s ceiling connected the FOH dLive to its DM32 AudioRack and eliminated the need for an analogue copper snake across the floor. Audience coverage was provided by a pair of line arrays and bands had a choice of in-ear or stage wedges for monitors.

For each new band, the team used dLive drag ‘n drop setups for custom fader assignments and the FOH engineer’s choice of FPGA EQ and effects. Since most bands did not bring a monitor engineer, monitors were mixed on the dLive S3000 by Stephen Davies for Cato Music, the British Music Embassy’s production company, and Mike Bangs, Touring Specialist at American Music & Sound.

“With the setup we provided,” Duvall said, “it only took a few minutes for an engineer to get comfortable with the dLive and the system overall.”

FOH engineer, Rachel Ryan, aka “MrSoundlady” concluded: “SXSW is hard enough on engineers and bands as it is but the dLive made a normally crazy gig really pleasant and the sound was great! I’d love to get the chance to use a dLive again in a not so rushed situation.”